“Open trade must go hand in hand with open policy making,” Jean-Claude Juncker said in his annual State of the Union speech last week. With this statement he kicked-off changes in the way the European Commission conducts trade negotiations.

His comment reflects a wind of change which seems to blow through the EU’s trade policy. But this wind is mostly confined to the topic of transparency, and this is not enough. Consumer groups have said for years that the very way of doing trade deals could use a spruce. In light of the European Commission’s willingness to embrace change, we release our vision on how to do this.

In the past, trade deals focused on cutting protectionist tariffs and quotas. This could be good for consumers if open markets increase the choice of products and services.

Present-day trade negotiations…plan dialogues between regulators to make legislative standards match. But if trade deals plan this, the goal of such cooperation becomes trade facilitation, not consumer protection, and that’s just wrong.

But contemporary trade deals go beyond ‘trade’. They set rules for many areas of economic life. Examples of this include the flow of personal data across borders, the regulation of chemical substances or the protection of intellectual property rights. By attempting to regulate these matters, trade deals directly impact our law-making process at home.

Consumer organisations monitor and criticise this, let’s call it, imperial overstretch of trade policy. But there is a way to make trade work for people, and through it, make global markets deliver for consumers.

Earlier this year, an alliance of EU & US consumer groups proposed to change the way ‘trade deals’ are negotiated. Our vision builds on this: The first step is to make trade deals focus back on actual trade issues, such as import tariffs, enforcement issues and ensuring that goods which enter a market meet its health, environmental and safety standards. An example of the latter is that food imports meet EU hygiene standards.

You may think: wait, isn’t the inclusion of such standards already beyond what consumer organisations want? No, there is a critical nuance. It is logical that imports and exports between trading partners meet the standards of the country they’re heading to. This is a matter of what trading partners must respect of each other before they access each-others’ markets. Which can be discussed in trade negotiations.

However, regulations – that is: the law-making process through which these standards are created – must not be undermined by trade deals.

How regulators should cooperate

Let’s expand on this. Present-day trade negotiations aim to take down so-called ‘non-tariff barriers’. To say it differently: they plan dialogues between regulators to make legislative standards match. But if trade deals plan this, the goal of such cooperation becomes trade facilitation, not consumer protection, and that’s just wrong.

The technical terms ‘regulatory cooperation’ and ‘good regulatory practices’ rear their heads here. We’ve criticised these terms in the context of EU-US TTIP negotiations. But that is not a critique of regulators cooperating.

It is logical that imports and exports between trading partners meet the standards of the country they’re heading to… However, regulations – that is: the law-making process through which these standards are created – must not be undermined by trade deals.

On the contrary: we welcome talks between regulators. But this ought to consist of information-sharing – an exchange which should not be planned in trade negotiations. Examples of this already exist between the EU and US in the fields of financial services and manufacturing of medicines.

The point is not to turn this into cooperation on the very regulations themselves.

Create a consumer-specific chapter to push for political will 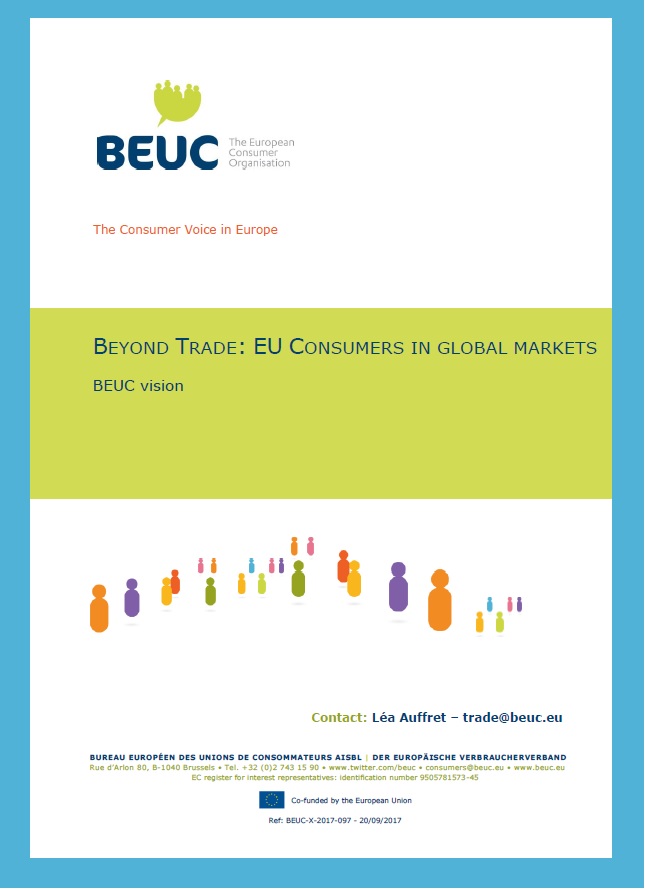 Protection is only one side of the coin. More attention is due to consumer benefits in the EU’s trade policy.

Recent EU trade agreements only include bits and pieces of consumer protection. There is no common chapter for consumers, as exists for example for small and medium-sized enterprises. We therefore propose to include a consumer-specific chapter with trade deals.

This chapter can demonstrate that trading partners commit to maintain protections and envisage benefits. It could also refer to ways to reinforce consumer trust, and guarantee enforcement of laws designed to protect and empower consumers. It would be an invaluable tool for the EU to display that it considers them to be important beneficiaries of its trade policy.

If its efforts at improving transparency are the yardstick, we conclude that the European Commission really aims to adapt its trade policy for the better. We suggest it takes on board the consumer view and that all European institutions, including Member States, match its willingness to change.

Read the full BEUC vision on EU consumers in global markets (or a summary) and our model consumer chapter for trade agreements.