Regulatory cooperation: perhaps boring, but the TTIP storm on the horizon

Disclaimer: This analysis is based on the leaked version of the regulatory cooperation proposal. We will soon provide further analysis based on the textual proposal published by the Commission.

Regulatory cooperation is on the face of it one of the least exciting concepts within the TTIP negotiations. Not only can many not yet agree on the name to be used – convergence, coherence, cooperation – but also this concept, however it becomes named, is so broad that it can cover regulators 1) merely talking to each other 2) blocking each other’s regulatory initiatives. 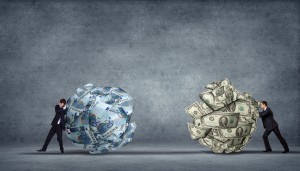 This makes it possible for those who don’t want to wake up sleeping dogs (but who is still sleeping?) to spread reassuring messages about regulatory cooperation as a tool to simply eliminate redundant administrative formalities.

But, let’s face it, the latest leaked version of the Commission’s proposal on regulatory cooperation, to be submitted to the US for this week’s round of negotiations, just confirms that regulatory cooperation is the coming storm on the horizon. Why? I will try to provide just a few of many answers to that, while making great effort to not bore the reader.

A surreal institutionalisation of lobbying

The Regulatory Cooperation Chapter announces the goal of reducing “divergences” between EU and US laws. A ‘soft’ method is envisaged – no mutual right to veto (sigh of relief) – as the whole chapter is drafted around efforts and endeavours rather than obligations.

However, the underlying procedures and structures being championed will as a matter of fact increase avenues for foreign corporate lobbies to make their concerns on regulation heard via the institutional channels provided by TTIP (sigh of despair).

Increased corporate interest influence leads to less balanced stakeholder engagement in EU decision making. This is exactly the type of development the European Ombudsman has just criticised in her opinion on Expert Groups (‘Ombudsman: How to make the Commission’s expert groups more balanced and transparent’).

While more transparency will in principle also benefit public interest lobbyists by opening more possibilities to bring their perspective to decision makers, a reality check leads to the conclusion that NGOs just do not have the resources to compete with corporates when it comes to multiplying presence and influence.

A scandalously wide scope #1: extension to all sectors, also those excluded from TTIP!

The draft Regulatory Cooperation Chapter provides in Article 3 that it is applicable to all planned regulatory acts, also those sectors not covered by TTIP, e.g. privacy protection. I am not sure this was the original intention of the Council’s mandate?

From the consumer perspective, this carries the risk that all reassurances that TTIP excludes sensitive areas such as data privacy or hormones in beef are without substance. Regulatory cooperation has the potential for our current and future regulatory framework in all sectors to be questioned.

While the current text only applies to initiatives at EU level, it provides serious hints that the system could be extended to national regulatory acts. Those hints appear in the General Notes, (#4), but also in the Placeholder Initiating Section (II) and the placeholder provided for in Article 12: exchanges on regulatory acts at non-central level. This means that legislation planned by a Member State (or one of its federal entities?) would also be covered by the procedures set out in that Chapter. I am sure Member States will fully appreciate this!

From the consumer perspective, this implies national or regional authorities, who in due application of the principle of subsidiarity are entitled to take regulatory actions to protect consumers, will also be submitted to this burdensome process. The US could mingle with the law making programme of a Member State, a region, or even a city, merely by claiming this activity might have a significant impact on trade!

So TTIP induced benefits for companies risk being largely neutralised by bureaucratic costs for tax payers! Is this in line with the Better Regulation Agenda? Why is the Commission so keen to get rid of waste legislation, while creating this new bureaucratic leviathan?

A manifest illustration on how you chill regulatory activity

These new procedures and structures provide a wealth of opportunities to slow down new regulations or to activate reviews of existing ones[1]. It is insincere to hide behind formal reassurances of “non-mandatory exchanges” and assert there will be no mutual right to veto, because what is at stake here is rather the opportunity to influence. There is a clear risk of paralysis by analysis, leaving consumers exposed to poorly or unregulated risks in the meantime.

An anthology of vague notions, calling for interpretation and disputes: not smart!

The chapter cites numerous vague concepts such as “significant”; “undue delay”; “executive branch”. At the very least, these are not helpful to streamline smooth dialogue between regulators. This lack of legal certainty leads to the risk of questioning any possible regulatory activity. Even if at the end of the day a regulatory act is upheld, its introduction is delayed. This is not in the consumer interest.

This Regulatory Cooperation proposal has very little to do with trade. It amounts in real life to a divorce of the fundamental principles of our legislative sovereignty – as in practice it allows for other jurisdictions to mingle among our decision making procedures. This might, in the context of the globalisation of our economies be a necessary step. But if so, its conditions should be discussed openly and democratically with all EU and national institutions and their stakeholders. It should not be left to this wide-reaching mandate of the Commission for a trade deal.

[1]An example? Imagine the Commission takes a regulatory initiative in the context of an ambitious (hopefully) circular economy package which would oblige suppliers to inform consumers about the availability of spare parts (thereby also creating incentives to repair and creating EU ‘green jobs’). Even before it has tabled a draft proposal, it will have to inform the US focal point about its “idea”. It’s a reasonable bet that the US will put in motion the whole framework requesting its entry into a regulatory exchange, which give rise to a ping pong activity which can take several weeks and months. Supposedly the Commission will take account of these comments in drafting its act. If not, the  regulatory chapter would allow the US to again put in motion a regulatory exchange at the very moment the official impact assessment is launched (because according to the current text (Art. 7) the Commission must take account of the US regulatory approach on related issues) leading to a never-ending story of disproportionate influence.