TiSA mandate: a simple piece of paper or a symbol of democratic scrutiny?

While TTIP is in the spotlight…

The Transatlantic Trade and Investment Partnership (TTIP) are not the only big trade negotiations happening now.

The EU and 22 other member states[1] of the World Trade Organisation (WTO) are currently negotiating a multi-party deal on trade in services (TiSA). These negotiations began in the spring of 2013 and 11 rounds have taken place since then, all with a degree of discretion bordering on secretive.

The idea behind TiSA is to facilitate trade in services like telecommunications, financial services and transport. 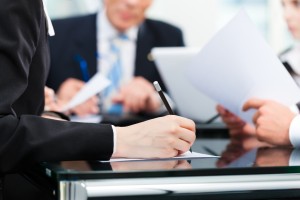 TiSA: what’s in it for consumers?

High quality and balanced liberalisation of trade in services could mean cheaper services for EU consumers, competitive pressure on markets, improved quality, greater choice and even the possibility of promoting the EU’s high standards multilaterally.

However, negotiating is always a matter of compromise and to win in some sectors, the EU will have to make concessions in others. As such, preserving existing consumer rights and making sure the EU and its Member States maintain their ability to adopt higher protection standards in future will be essential.

Initially and as usual, the mandate was classified. It has since been released after public pressure. The mandate (also called the “negotiating directives”) contain the guidelines the Commission receives from the Council when negotiating on behalf of the Member States.

The late declassification of the negotiating mandate is a good sign for transparency and accountability, but its content is very surprising. While the TTIP mandate is an 18 page document describing the structure of the agreement, identifying offensive and defensive interests as well as the red lines, the TiSA mandate is only a very general 5 page document.

It makes us wonder why two mandates covering the two most ambitious trade negotiations of our times differ so much. What does it imply for consumers?

We find it very concerning that Member States could give a mandate to the European Commission on the basis of only those few lines. What are the guarantees that TiSA could not be used as a back door to include provisions which could undermine the high standards of the EU in financial services, data protection and e-commerce? And is it not a real possibility given the negotiations include countries who have much less well-developed consumer protection standards than the EU? European consumers benefit from greater rights than some TiSA negotiating countries, for example the right to withdraw from an online purchase or be compensated for a cancelled flight.

TiSA: what is at stake for e-commerce, financial services and data protection standards?

The only safeguards mentioned explicitly in the TiSA mandate concern cultural diversity, the audio-visual sector, labour and public services. The mandate stresses that Member States will have the right to exclude a limited number of service sectors and preserve the right to regulate and introduce new regulations to meet public policy objectives.

It also refers to Article XIV of the General Agreement on Trade in Services (GATS), which contains safeguards which can be applied to data protection for example, but is not specifically stated in the text. Contrary to the TTIP mandate, there is no clear reference to fundamental freedoms.

I would have expected stronger language to effectively safeguard existing EU consumer rights. Particularly as it is well known that US negotiators are pushing for TiSA to dismantle EU rules on data localisation – which are directly linked to cornerstone data protection rights enshrined in the EU Charter of Fundamental Rights.

Several Members of the European Parliament have already called for the rejection of the US proposal on e-commerce in TiSA (and asking the Commission not to consider it a basis for the TTIP negotiations).

Idea for the future: Consultation on mandate

This illustrates the importance of the drafting phase of a negotiating mandate for any trade or investment negotiation. The Commission itself states that the negotiators are held accountable to the mandate. Now that the EU is updating its trade and investment strategy for jobs and growth, would it not be the right occasion also to look at how negotiations take place?

The Commission should involve the European Parliament, the public and public interest organisations during the scoping exercise, not after the launch of negotiating processes. We understand that there was a tight window of opportunity when the idea of TiSA appeared but it should not be an excuse to bypass democratic good practices.

More transparency for a greater accountability and acceptability

Transparency is a crucial feature for trade policy to be accepted by citizens. Such a principle should be automatically applied to all future trade and investment negotiations. Let us apply 21st century negotiating methods to 21st century agreements.