NextFluorinated substances: the best packaging for your fast food?
Trade

Want to build an international investment court that won’t go up in flames? Fix the underlying system!

Whether or not you are a trade aficionado or aficionada, you have likely noticed the glaring headlines about free trade deals between the European Union and Canada or the United States. A root cause of the controversy around these deals is that they allow investors to bring lawsuits against states for measures that (supposedly) impact their investments.

At BEUC, we think this approach endangers legislation made in the interest of consumers.

We are not alone: recall the fiery politics when the Belgian region of Wallonia temporarily refused to sign off on the trade deal between Canada and the EU. This was in part due to their disagreement about the inclusion of a system allowing investors to sue states.

Whereas last minute concessions to Wallonia allowed all parties to emerge unscathed from the ensuing political mayhem, this episode set Canada and the EU on a thinking path. These trade partners are now attempting to address criticism of investor protection systems by proposing an international investment court.

Will this proposed court be sufficiently flame retardant that it can prevent another political inferno?

Arbitration mechanisms between foreign investors and states have been included in international investment treaties since the 1950s. One type is the Investor-State Dispute Settlement mechanism, or ISDS for short. ISDS allows investors to pursue arbitration if they believe the host nation – usually a developing country – violates their investment rights.

These mechanisms are still included in today’s free trade agreements. And although termed ‘free trade’, such agreements cover a lot more than just import tariffs as they deal with differences in rules between countries, potentially including consumer protection.

UNCTAD statistics show that fewer than 50 [ISDS] cases were litigated between the 1950s and the 2000s. Compare this to the situation as of 2015, when 696 are known to have occurred.

This causes a short circuit that can’t be ignored: consumer regulations are at risk of being challenged as violations of investo 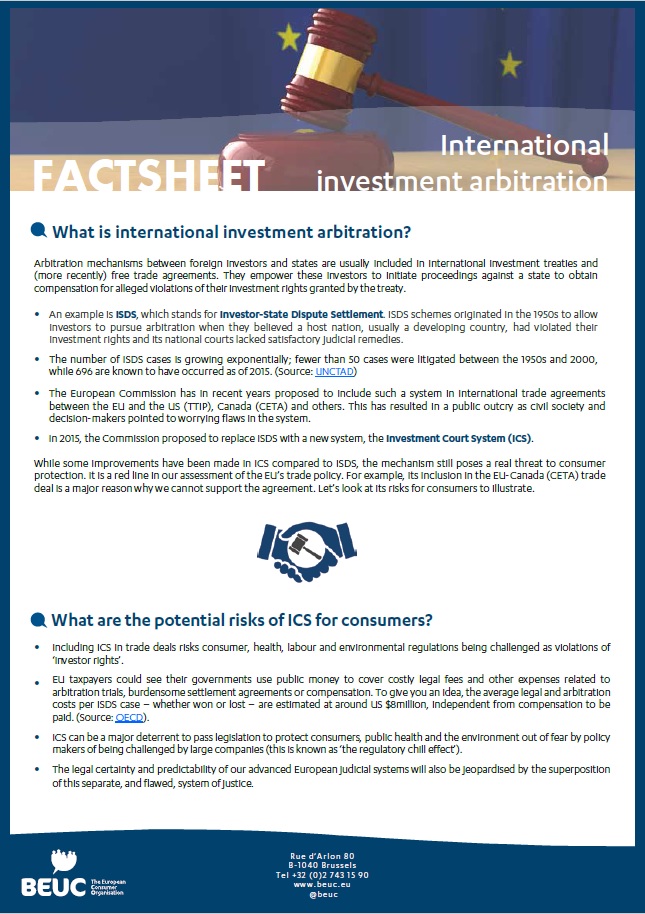 r rights. Even the mere threat of a lawsuit – and having to compensate an investor – can deter governments from legislating in the first place.

Especially alarming in this regard is the massive growth of ISDS cases in recent years. UNCTAD statistics show that fewer than 50 cases were litigated between the 1950s and the 2000s. Compare this to the situation as of 2015, when 696 are known to have occurred.

This mechanism has been a no-go for BEUC, as it can hinder states from legislating on consumer protection. But now that the EU is open to tweaking the system, will an international investment court change our view?

The full acronym monty: from ISDS to ICS and now MIC

The European Commission, under Trade Commissioner Cecilia Malmström, has made serious attempts to remedy criticism of its trade policy.

For example, the Commission tackled some of the shortcomings of the original ISDS system and made a new proposal under the moniker of ‘Investment Court System’ (ICS). ICS intends to step away from private arbitration, reduce conflicts of interest, and increase transparency. However, as consumer regulations can still be challenged through lawsuits, we do not support it.

The European Commission, under Trade Commissioner Cecilia Malmström, has made serious attempts to remedy criticism of its trade policy.

Due to continued public mistrust concerning this updated system, Canada and the EU now propose to address investor protection in a full-fledged public international court (known as MIC, where the M stands for ‘multilateral’).

An international investment court is not the revolution we were hoping for. This court would simply be a building; with for example clearer rules on the selection and 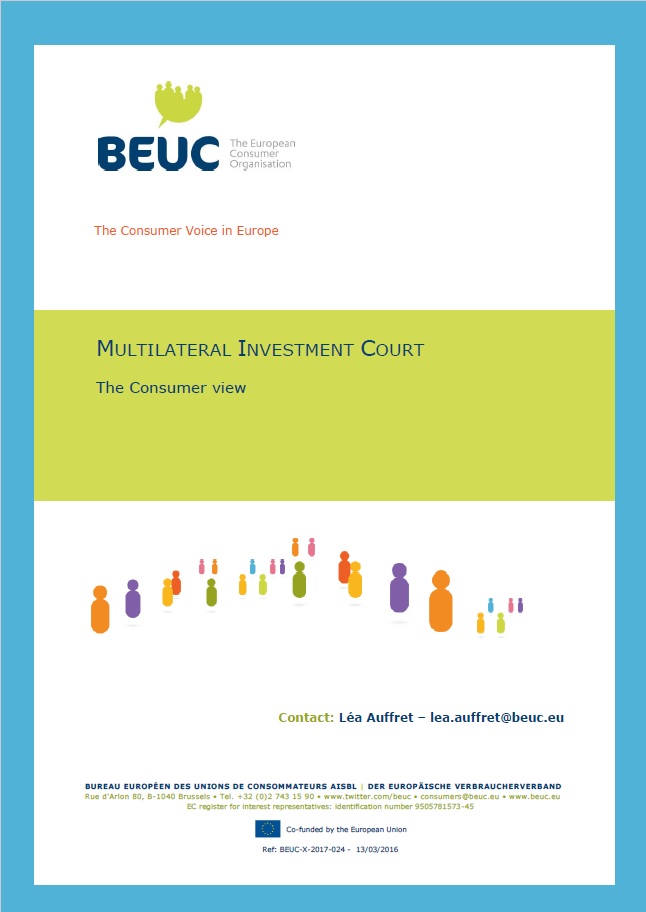 remuneration of judges. New rules that would mitigate the shortcomings of existing investor protection systems are not anticipated.

Why? Because the MIC judges will address foreign investors’ claims based on what is written in the related trade deals. As the current investor protection rules remain risky for consumer protection, we can only support such an international court if the politically combustible underlying system is fixed.

To put it differently: it’s as if you’ve constructed a new building, but decide to fill it with flammable objects. One little spark is all that is needed to set it ablaze. Considering the Wallonia saga and the accompanying widely-advertised public discontent, this ‘smouldering mess’ scenario should and can be avoided.

An international investment court …would simply be a building. New rules that would mitigate the shortcomings of existing investor protection systems are not anticipated.

That is why the EU must ensure that investor claims on consumer protection measures – and public policy interest in general – will not be admissible by the court under any circumstances.

Most importantly, the European Commission must ask the European Court of Justice to check whether or not such system is actually compatible with EU law. As long as they have not done so, the very foundations of an international court will be unstable.