During a roundtable held in the BEUC office yesterday, the European Commission’s First Vice President Frans Timmermans and Vice President Jyrki Katainen delivered strong messages about the need for Ecodesign. They revealed the product groups that will be included in the long-awaited Working Plan to be released on 30 November, as part of the Energy Package.

New product groups to be covered under the Ecodesign Working Plan 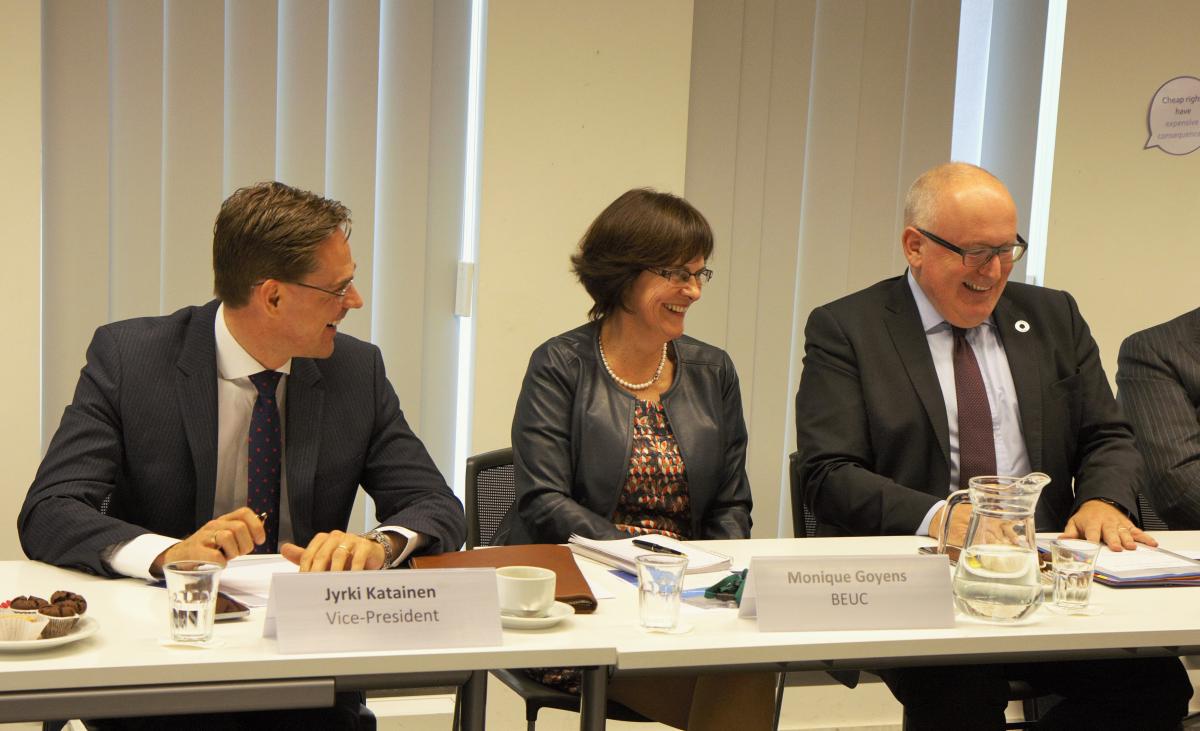 Out of the 15 products that the Commission initially considered, they retained 6 groups, namely:

Those products have been selected because the Commission believes the energy savings potential is the highest. Toasters, hair dryers are excluded from the list. Smartphones were not mentioned.

“It is a relief that the Commission appreciates how much Ecodesign is needed for the planet, for innovation and for consumers. To tap the full potential of this tool, the Commission has every interest in getting a wider range of products designed in an eco-friendly way.”

"By building on its success and further expanding our ecodesign policy to products with the highest saving potential, we will help spur innovation, improve Europe's competitiveness, contribute to energy efficiency and the fight against climate change and put more money in people's pockets. It's a no brainer."

"The ecodesign policy is a triple win for Europe: a fair deal for consumers, business opportunities and certainty for the industry as well as efficient use of resources for sustainable growth. The consumers get the same products, but with improved technology, leading to annual savings up to €490 per household. The businesses benefit from clear and predictable rules of the single market and can gain an additional €55 billion yearly revenue for new investments and jobs. The new measures will help saving energy equivalent to the primary annual energy consumption of Sweden by 2030. Consumers, industry and environment all benefit."

“Bold Ecodesign measures are a tried and tested way to deliver on climate protection, lower energy bills and create more durable products – yet two years after they were promised, the Commission is still to publish its plans. The delay so far means that consumers and businesses will lose up to €10 billion through using inefficient appliances in homes and workplaces for a longer period of time. As COP22 kicks off in Marrakech, the time is right for the EU to show it is acting to achieve the Paris climate goals by producing an ambitious Ecodesign working plan.”

“Ecodesign policy can be successful if it is complemented with measures to support the uptake of energy efficient products. For the heating sector, which alone makes up half of the energy saving potential of Ecodesign, the biggest challenge is the modernisation of the installed appliances, the majority of which are old and inefficient.

To modernise them in line with the EU climate and energy goals, Ecodesign should be accompanied by an Energy Label that promotes efficient technologies; it should be supported by campaigns that raise consumer awareness, for example through regular inspections of installed appliances, which can push the replacement of old appliances with new, efficient ones.”

“Ecodesign for electric motors and drives has spurred innovation and helped European companies to become leaders in energy efficiency technologies. It has an overall positive business impact as it changes the focus from cost to total lifecycle cost. A coherent regulatory framework for the whole European market provides security for investment for businesses. To unlock the largest possible energy savings potential in industry, it is important that Ecodesign takes a system approach, beyond individual components.”