Today, researchers of the University of Amsterdam’s Institute for Information Law (IViR) published a study commissioned by BEUC and three other NGOs1. The study shows that the European Union (EU) does not sufficiently safeguard citizens' personal data and privacy rights in its trade agreements.

Modern digital markets rely on the processing of personal data, but regulations on how to protect these differ widely from country to country. A new generation of trade agreements increasingly allows unrestricted data transfers, including personal data, between countries. 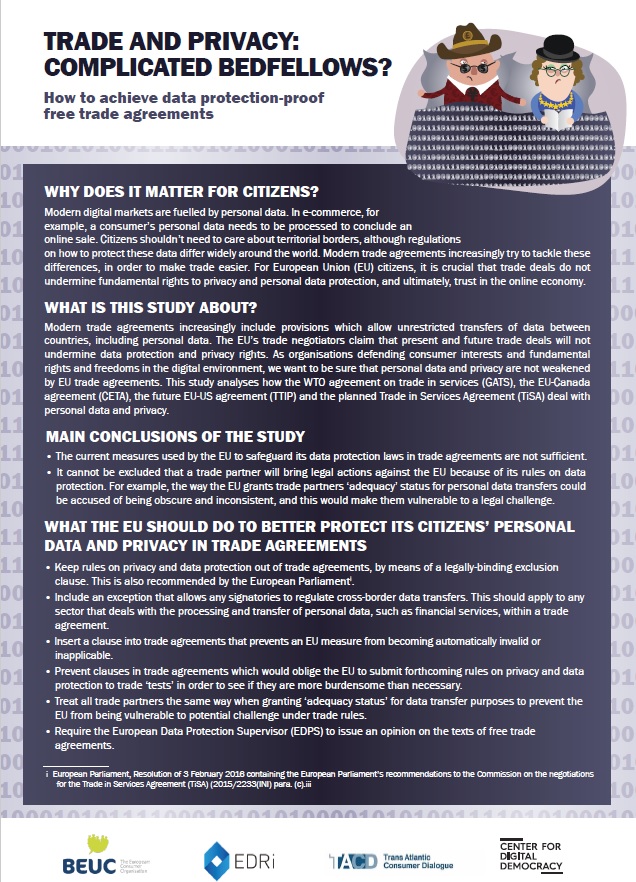 This ground-breaking study sheds light on how trade agreements – for example, the future EU-US trade deal (TTIP) – treat personal data and privacy. By looking at both EU and international law, the researchers conclude that the EU should protect its citizens’ personal data, and prevent their privacy from being weakened in trade agreements. To do so, the EU must take action to safeguard its rules on data protection from legal challenge by its trade partners.

“It’s unacceptable that the EU’s privacy and data protection rules could be challenged through trade policy. Trade deals should not undermine consumers’ fundamental rights and their very trust in the online economy. We’re pleased to see this study clearly echoing the European Parliament’s call to keep rules on privacy and data protection out of trade agreements,” Monique Goyens, Director General of The European Consumer Organisation (BEUC), commented.

A factsheet detailing the study’s main recommendations is also available.

1 The study was commissioned by BEUC, European Digital Rights (EDRi), the Center for Digital Democracy (CDD) and the Transatlantic Consumer Dialogue (TACD).

Contact department
@DPCIreland You can find more on our initial complaints here: https://t.co/LyqhpoRcmm. The GDPR is only a game-chan… https://t.co/F7inovMd96
19 hours 27 min ago