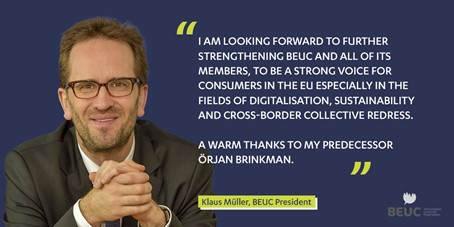 About Klaus Müller: A member of BEUC’s executive committee since 2017.
Mr Müller studied economics. He previously worked as a Member of Parliament for the Green Party in Germany. In 2006, Mr Müller left politics to work in consumer protection. This shift was motivated by his eagerness to help make the lives of consumers easier, safer and more affordable. He first became Executive director of the Consumer Association in North Rhine Westphalia. In 2014, he became the Executive Director of vzbv (German Consumer Association).

About Luís Silveira Rodrigues: A member of the BEUC Executive since 2017.
Luís has been a lawyer since 1989. He is the Vice-President of Portuguese association for consumer protection DECO Associaçao. He started working for DECO, in 1997, as the Head of the Legal Department and was the Head of the Lobby Department for DECO Proteste, from 2000 to 2006. Luís is also the co-founder and director of RAIZ International Active Learning School and has been a lead trainer in several capacity building trainings led by BEUC.

Contact department
Why is getting consumers on board Europe’s #RenovationWave key for it to succeed? No spoilers, but it's all in the… https://t.co/clTs6Aikco
23 hours 20 min ago