Home Publications A brave new world for consumers? Securing consumer trust in the Internet of Things

A brave new world for consumers? Securing consumer trust in the Internet of Things 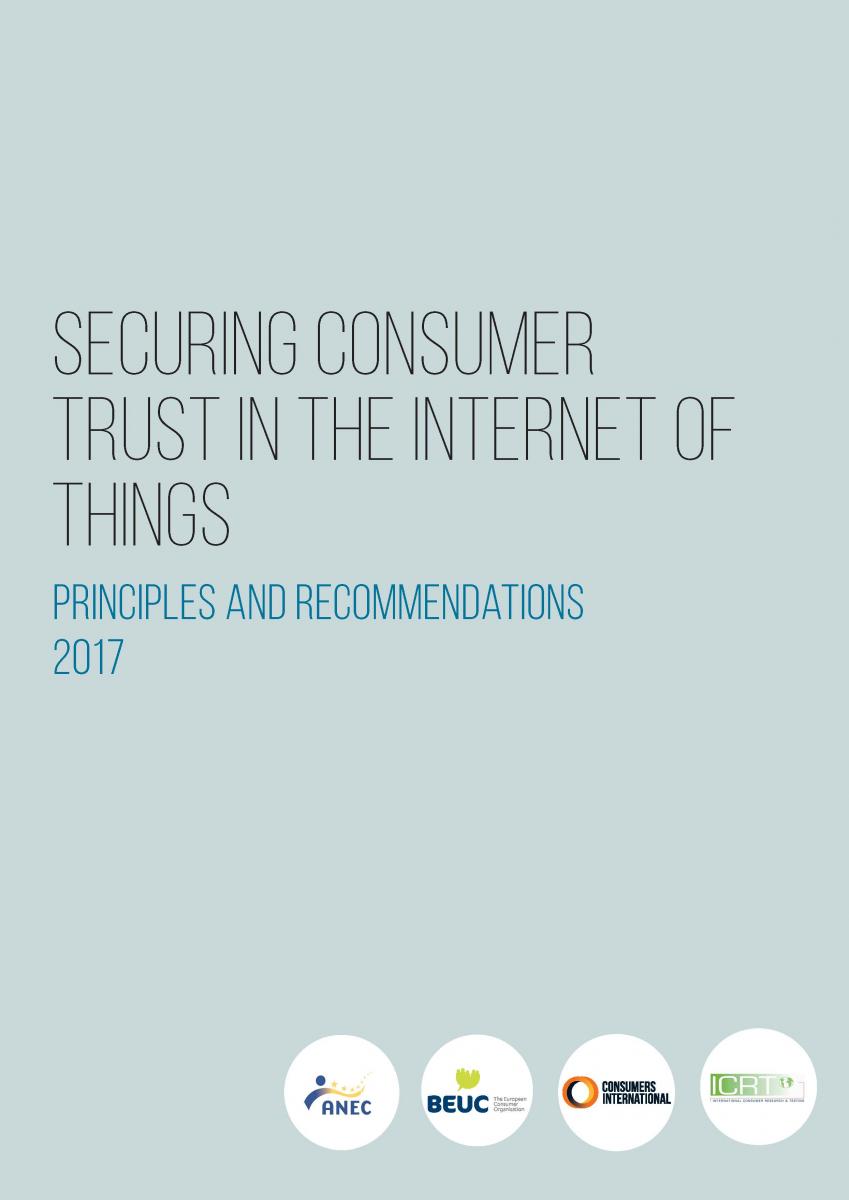 Brussels, 28 November 2017: Four global and European consumer organisations today presented their recommendations[1] to make consumer rights, privacy and security core features of the Internet of Things. The consumer organisations recognise the benefits of IoT applications but urge developers, manufacturers, policy-makers and regulators to deal with numerous challenges and risks.

According to estimates there will be 75 billion connected devices in 2025.[2] Connected devices have huge potential, for instance by making services more convenient, fixing products remotely and putting more responsive products on the market. However, they also carry risks such as 24/7 surveillance of citizens, complex liability questions when a self-driving car causes an accident and risks of remote control (electricity cut-off from a distance).

“The current product safety legislation and standards cover the safety of individual devices and hence may not be fit to protect consumers in the Internet of Things environment where devices are part of a bigger system. ANEC believes additional provisions and standards will need to be adopted to ensure the safety of the system as a whole.”

“Self-driving cars and the possibility to remotely pre-heat our homes are just some of many examples the Internet of Things may benefit consumers. But these advantages come with a catch. Policy-makers and producers need to make sure possible downsides such as surveillance though mass data collection and safety risks do not overshadow the opportunities of IoT.”

“Consumers need for security, proper support and privacy should be front and centre of IoT product development - not bolted on as an afterthought. We must work together with manufacturers, policy-makers and regulators to create a network that is safer and fairer for everyone.”

"The Principles document reflects the aspects ICRT will be testing when dealing with smart appliances. The document is not only a good guide for our comparative testing, but also an excellent road map for manufacturers as it is very clear now what we as consumers expect from smart appliances."

ANEC is the European consumer voice in standardisation. We represent the collective European consumer interest in the creation and use of technical standards, especially those developed to support the implementation of European laws and public policies. www.anec.eu

The European Consumer Organisation (BEUC) represents 43, independent national consumer organisations from 31 European countries. For over 50 years, BEUC has worked relentlessly as the voice of European consumers. We bring consumers’ viewpoints from across Europe to the EU policy making arena. www.beuc.eu

Consumers International brings together over 200 member organisations in more than 100 countries to empower and champion the rights of consumers everywhere. We are their voice in international policy-making forums and the global marketplace to ensure they are treated safely, fairly and honestly. www.consumersinternational.org

International Consumer Research & Testing (ICRT) is a global consortium of more than 35 consumer organisations dedicated to carrying out joint research and testing in the consumer interest. ICRT member organisations do not accept advertising and are independent of commerce, industry and political parties. www.international-testing.org