Home Publications An end in sight to currency conversion scams

An end in sight to currency conversion scams

The European Commission has published proposals to tackle a longstanding currency conversion scam that consumers get sucked into when they’re abroad or online. 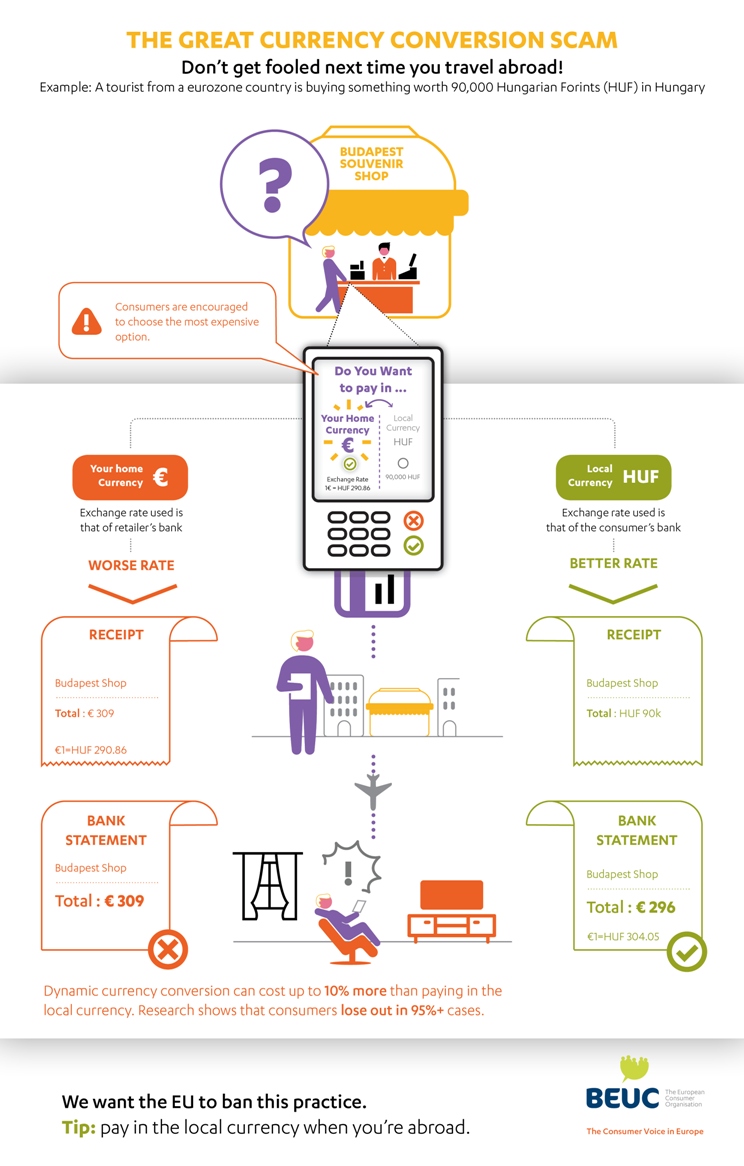 The practice, called dynamic currency conversion, involves consumers choosing between paying for something in their home currency or in the local one, often when they’re travelling. Consumers who choose to pay in their own currency almost always end up losing out because it’s a more expensive option [1].

The Commission has proposed to increase transparency around the practice, forcing merchants and ATM service providers to display all the costs and exchange rates used in either option so that consumers can choose the less expensive solution. It would then be up to the European Banking Authority to work out the details of what this would have to look like in practice at terminals or ATMs. BEUC urges legislators to take the consumer’s real behaviour into account when designing the practical aspects of these rules.

Monique Goyens, Director General of the European Consumer Organisation (BEUC), said: “It’s high time that the opacity surrounding this practice is lifted. Consumers frequently prefer to pay in a currency they are used to but are not at all aware that they pay more. I applaud the Commission’s action to increase transparency.

“In offering the service, merchants and service providers are effectively adding a cost to the consumer’s bill without him knowing. At the very least, the consumer should know what he is being charged.”

The proposals today also cover payments made in euros from countries that do not have the euro as their national currency. The cost of transferring money in euros from a non-euro EU Member State will in the future not be higher than if the equivalent payment had been made in the local currency at national level.

For example, a Bulgarian consumer who transfers euros to Italy will be charged the same fee as for a transfer in lev within Bulgaria. This will be particularly helpful as most cross-border transactions in non-euro area Member States take place in euros.

[1] Research from German testing organisation Stiftung Warentest found that consumers are almost always losing out when they pick the home currency option.

A study by a Norwegian bank covered 1,500 transactions by Norwegian customers abroad. Only 4 of 1,500 cases where cash withdrawals were in Norwegian kroner were cheaper than where the withdrawal took place in the local currency, meaning the consumer lost out in more than 99% of cases.