The European Consumer Organisation (BEUC) is publishing today a report showcasing many misleading tricks that food makers commonly use on labels across the EU. The report Food labels: tricks of the trade highlights three practices that sugar-coat the actual quality of foods and drinks: 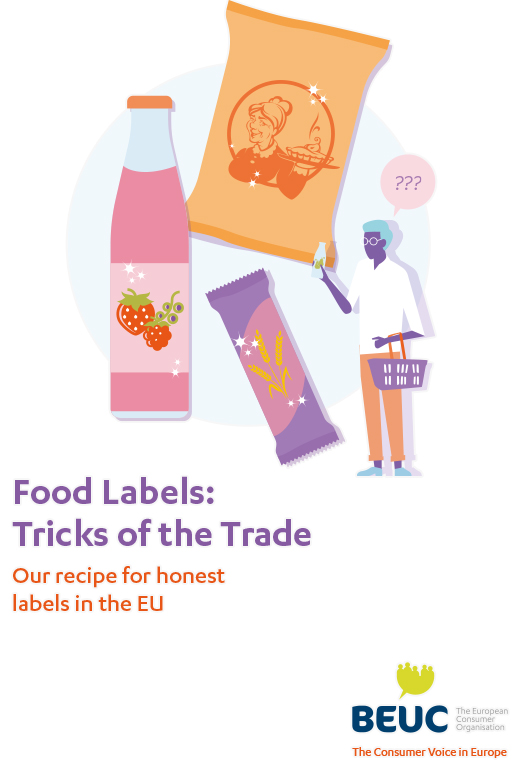 The problem mainly stems from a lack of EU rules defining in which cases manufacturers can use such terms. BEUC has set out recommendations for the EU institutions to make food labels more honest.

Consumer organisations from 10 countries that are part of the BEUC network have unveiled those deceptive practices.1 The three categories highlighted in the report may be just the tip of the iceberg.

“It is striking that a ‘pineapple & coconut’ drink can be made up of less than one third of these fruits. Or that breadcrumbs labelled ‘grand-mother style’ contain industrial ingredients. Still, these are the kinds of misleading labelling practices that consumer organisations have repeatedly found across Europe.

“Surveys in Germany and the Netherlands show that more than 80% of consumers do not trust food labels2, and this report proves they have good reasons. Pressure from our member organisations have led some manufacturers to make their packaging more honest. But the EU institutions and Member States also need to step up their game.

“The EU law clearly states that food labelling and packaging should “not mislead the consumer”.3 However, manufacturers have been taking advantage of grey zones in the EU law to make their products look like they are better quality than they actually are. It is urgent that the EU institutions come up with a recipe to end those deceptive practices and that Member States make sure food makers comply with such rules.”

What BEUC asks for:

2 Surveys by our members have shown distrust rates of 85% in the Netherlands (Consumentenbond) and 84% in Germany (vzbv).