As of tomorrow, negotiators will meet in Geneva for the 18th round of negotiations for a Trade in Services Agreement (TiSA). This little-known trade deal is about everything from phone-calls to making payments, ordering goods online, international flights and more. It is therefore vital that civil society can give constructive feedback on the negotiations. This is currently next to impossible, due to a lack of publicly available texts1. 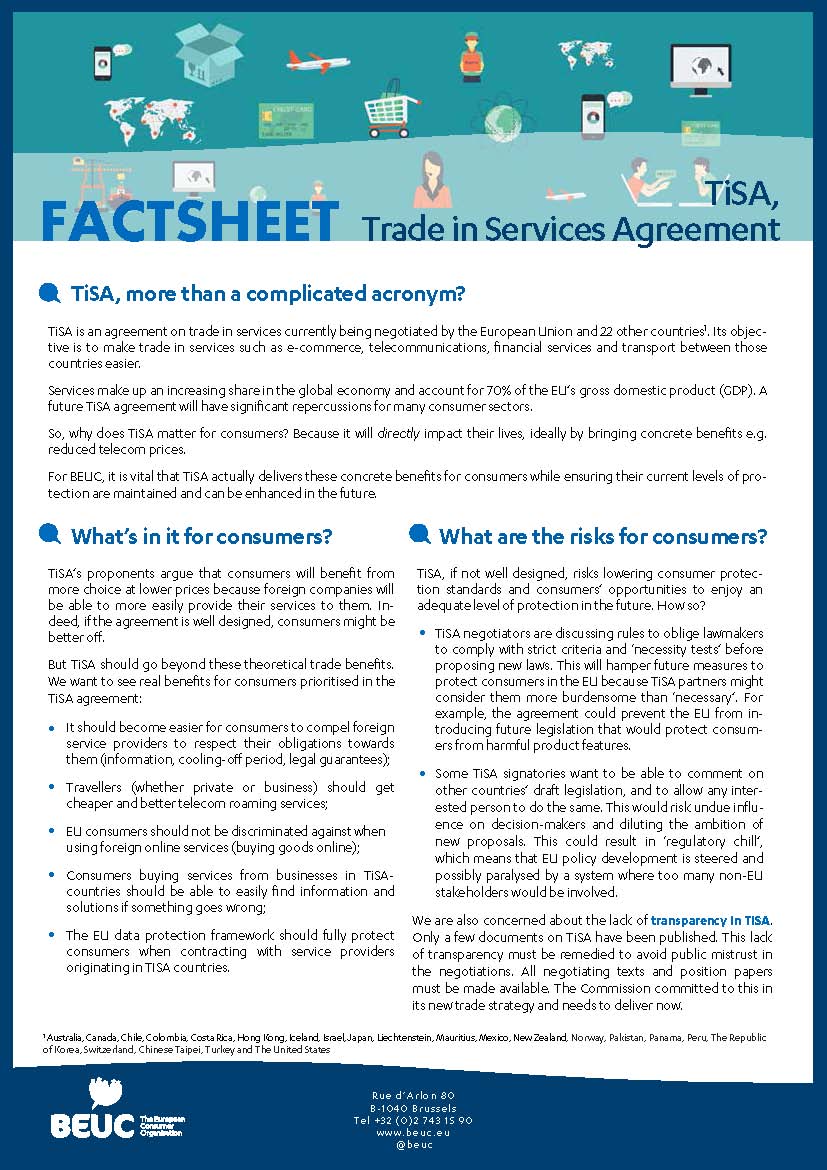 Next week Wednesday, on June 1st, EU Trade Commissioner Cecilia Malmström will chair a meeting with trade ministers of the TiSA parties in Paris.

“Again a major trade deal is being negotiated without the public having access to enough information about it. This is unacceptable as the rules will affect all of us for years to come. Consumer organisations from around the world are calling for urgent transparency. Members of the European Parliament said in February that trade deals should be more transparent and must deliver for consumers. We expect the negotiators will follow this advice, especially if they want to prevent being exposed again to a high level of mistrust by public opinion and its representatives, as has been the case in trade deals with Canada and the United States.”

“An agreement on trade in services must provide clear benefits to consumers, including protecting their rights at home, when they travel and when they’re buying online. It should also provide rock solid safeguards to ensure consumer standards are safeguarded and can be enhanced in the future.”

Monique Goyens also commented on the release by WikiLeaks of various texts of the agreement:

“Leaks should not constitute the main source of public information about negotiations that will profoundly impact the lives of consumers across Europe and the world.”

[1] Only a few parties including the EU and Switzerland disclose their negotiating proposals.

Notes: The Trade in Services Agreement (TiSA) is negotiated between the European Union and 22 trading partners. These include, for example, Canada, Japan and the United States. The objective of the agreement is to make trade in services such as e-commerce, telecommunications, financial services and transport between these countries easier.