NextWhen medicines cost an arm and a leg. And an eye
Digital rights

How Google is eroding consumers’ freedom to choose

Google hit the headlines last year when the European Commission fined the tech giant €2.42 billion for breaching EU antitrust rules. It has been argued the European Commission has over-stepped the line here. After all, if people like and use Google services, where is the harm to consumers? The harm is clear: Google’s anti-competitive behaviour has directly affected consumers by undermining their freedom to choose from a wider array of merchants and products.

A (very) brief history of the Google Shopping case

In November 2010, the Commission opened an investigation into various parts of Google’s popular search engine as a result of several complaints received against the company for abuse of dominance. At the core of the complaints: Google is disrupting competition by favouring its own services to the detriment of its competitors who depend on a fair listing in Google’s search engine to strive. Google Search has a market share of over 90% in almost all EU countries.

Google abuses its dominance in one market (search engines) to push away its competitors in another market (comparison websites). As a result, consumers are denied the possibility to find offers which might better reflect what they are looking for than those appearing on Google’s websites.

In 2014, BEUC became a complainant against Google. We think that Google is unfairly favouring its vertical services across all kind of markets, including shopping, local search and travel.

The European Commission decided to focus its investigation on Google Shopping. According to the European antitrust body, Google had deliberately altered its algorithms so its own comparison services always appear at the top, and results from competitors automatically get a lower ranking, sometimes even disappearing from view.

After two years of unfruitful negotiations with Google, the European Commission, under the stewardship of Commissioner Vestager, charged Google for abuse of dominant position and breach of the EU’s antitrust laws. We all know what happened next [1].

Where is the consumer harm?

Some have argued that the Commission failed to prove Google’s behaviour harmed European consumers. Google itself says that everything they do is in the benefit of the user. We don’t agree.

Consumers are harmed because they might not get the most relevant results but rather those which are in Google’s interest.

Trusting Google to give them a result that corresponds to market reality, consumers will in fact find the merchants who are inside the Google Shopping box. What consumers will not know is that there might be other comparison sites offering other merchants, products and prices that could be better or more relevant for them than those displayed in Google’s own service.

This is what happens if we compare the offers available in Google Shopping and a competing comparison site like Kelkoo, who has been hit by Google’s anti-competitive behavior. 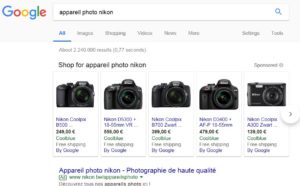 When searching on Google.be for a new camera I only get prominently the results served by Google Shopping, which display the biggest merchants operating in the Belgian market. However, there is no sight of Kelkoo as a comparison site and neither of its merchants. Therefore, for these merchants it is almost impossible to reach consumers and compete with bigger retail firms. 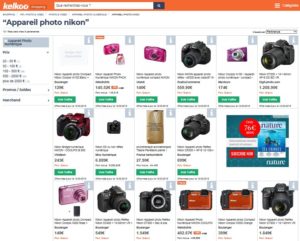 Google abuses its dominance in one market (search engines) to push away its competitors in another market (comparison websites). As a result, consumers are denied the possibility to find offers which might better reflect what they are looking for than those appearing on Google’s websites. It’s like walking down a shopping street but the pavement and streets are blocked beyond the Google-approved shops.

If Google continues favouring its own comparison services, competitors, such as Kelkoo, which depend on Google Search to reach their customers will be driven out of the market. The consequence will be less innovation and competition on quality comparison services.  And that is exactly what consumer harm is about!

Less comparison websites will mean that merchants end up with Google as the only company that they can use to reach consumers through Google Search. This would result in less innovation for tools to compare products, a cornerstone of a healthy e-commerce experience.

Google, with its dominant position in general search, has a special responsibility to not disrupt competition both for general search services and in neighboring markets such as shopping comparison or local search. And, quoting the Commission’s decision, “a system of undistorted competition can be guaranteed only if equality of opportunity is secured between all economic operators” [2]. Google’s favouring practice is not giving equal opportunities to those companies that want to compete on the merits and offer good innovative products to consumers.

Some say that Google would be unable to monetise the advertising space on its search engine results if it was forced to treat all comparison sites equally. That’s a fallacy. This case is not about Google’s ability to make money out of the advertising space in its search engine or through the service it offers to merchants in Google Shopping [3]. This case is about giving all comparison sites which compete with Google Shopping the same possibility to appear when consumers make a query on Google Search.

So what happens now? The remedy proposed by Google does not address need to compete on merits

Now the Commission has taken its decision, Google has no option but to comply. All eyes are now on how Google will implement the principle of equal treatment [4]. Google has presented an auction mechanism as a remedy to its anti-competitive conduct. BEUC and other complainants have raised concerns about such a model in which comparison sites would bid against each other and against Google to appear in the Shopping Box. This auction will not ensure that consumers get results based on merit, but more on the purchasing power of the bidders hence risking that only the biggest e-commerce firms will be displayed. The Commission should give a clear signal to market players that Google’s auction model as it stands does not comply with its decision.

Trusting Google to give them a result that corresponds to market reality, consumers will in fact find the merchants who are inside the Google Shopping box. What consumers will not know is that there might be other comparison sites offering other merchants, products and prices that could be better or more relevant for them than those displayed in Google’s own service.

In parallel, Google has appealed the decision before the General Court of the EU in Luxembourg, which will hopefully confirm the June 2017 decision. BEUC applied to intervene before the Court in support of the Commission to ensure that the European judges get European consumers’ perspectives in this landmark case.

What about the other areas on which Google strategically uses its dominant position?

The Google Shopping case is only one piece of a bigger jigsaw. Just like consumers use Google Search to look for cameras or shoes, they also use it to look for restaurants, dentists and hotels. In this area (technically called ‘Local Search’), Google does pretty much the same thing: it boosts its own review services by demoting its competitors. The consumer reviews site Yelp has been fighting Google over the last 6 years on this issue. Now that the Commission has set a precedent with the Google Shopping decision, it should look at other such vertical services.

Google Search has become the gateway to the Internet. It is on every device consumers put in their houses, pockets or offices. Google’s dominance of the search market is unparalleled. It is the Internet’s most popular service and has become the entry point for so many other parts of the web. With such an important gatekeeping position comes an important degree of responsibility towards other market players and towards consumers.

The harm is clear: Google’s anti-competitive behavior has directly affected consumers by undermining their freedom to choose from a wider array of merchants and products.

The EU’s case on Google Shopping case is a very important first step to make sure Google stops abusing its dominance as a search engine to drown out its competitors in other areas. The objective is to give equal opportunities to all market players to compete on the basis of their own merit and gain consumers’ trust on an equal footing. And for consumers, this case is ultimately about their freedom to choose and about how much innovation and diversity they will have access to.