TTIP is hibernating. So let’s improve it.

At this point it’s perhaps a bit cliché to say it, but free trade is on shaky ground. Public support for trade liberalisation is waning, the Financial Times illustrated.

This scepticism is very much highlighted by wrangling on a proposed trade agreement between the European Union and the United States, known as TTIP. Across the board TTIP has been declared ‘dead’ or ‘failed’. But is this actually the case?

Of which ‘trade’ is the mortality questioned? 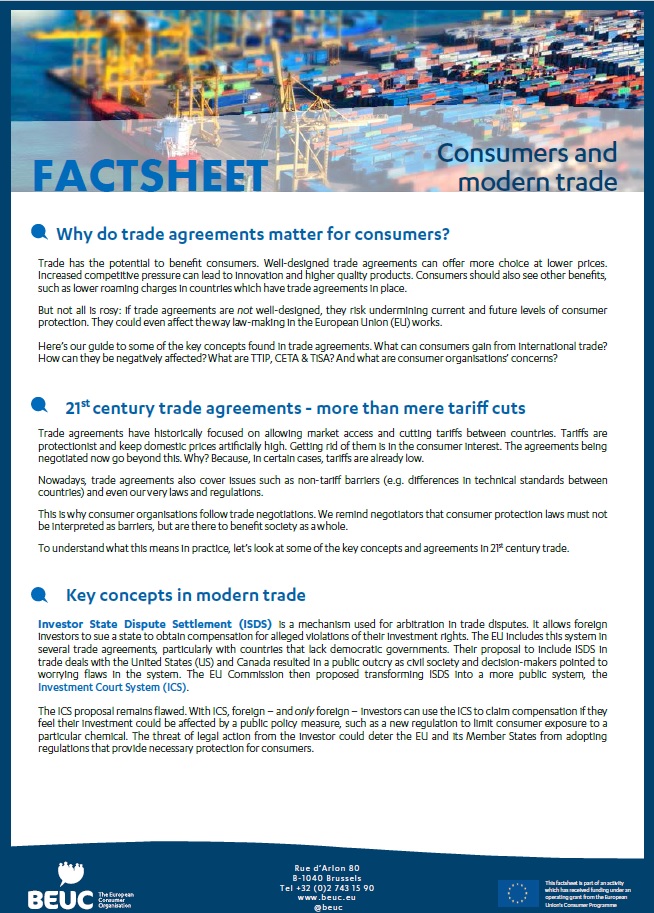 Instead, this is a modern trade agreement, which focuses on so-called ‘non-tariff barriers’. These are barriers importers face after the border. An example is when an EU company has to pass a product safety check both at home and in the US, rather than one single test. Avoiding the duplication can benefit companies and consumers, as long as the product’s safety is guaranteed.

The challenge is that a focus on ‘non-tariff barriers’ puts our very laws and regulations – consumer protection included – on the trade negotiation table. We must draw the line here: making trade easier yes, but a consumer-friendly law should never be seen as a ‘barrier’.

BEUC supports free trade in the traditional sense. Because lower tariffs can offer consumers with more and better products at lower prices. We are, however, wary of the ‘modern’ trend to look at current and future regulations through the lens of trade.

BEUC supports free trade in the traditional sense. Because lower tariffs can offer consumers with more and better products at lower prices. We are, however, wary of the ‘modern’ trend to look at current and future regulations through the lens of trade. When we express concern about ‘trade’, we defend the EU’s capacity to maintain and introduce laws on consumer protection.

What is the fate of TTIP?

While politicians are right to address public discontent with trade deals, commentators reminded us of the role that upcoming elections in Germany and France play in these statements. Negotiations are indeed stalling – but TTIP is more in hibernation than on its deathbed.

A hibernation phase? Yes, TTIP will be in stasis for many months. Once the current Obama administration leaves office in January 2017, the EU has to wait for the new US Trade Representative under the Trump administration to start his/her work. We can expect this to happen around summer 2017 or even later.

This doesn’t mean negotiations will be smooth sailing once the break’s over. There are already wide discrepancies between the EU and US on topics such as investor protection, public procurement and geographical indications. And, perhaps needless to say, a new US administration could take a different approach to TTIP.

As it’s too early to tell what this approach might be, it’s wiser for us to keep up the pressure and talk about how TTIP could be improved, rather than dwelling on its heartbeat.

Take TTIP’s hibernation as an opportunity to improve it

Over the past months, we’ve been asked about the status and future of TTIP for consumers.

BEUC’s answer is that TTIP’s hibernation is a good moment for negotiators to recast it as a consumer-friendly deal.

TTIP’s hibernation is a good moment for negotiators to recast it as a consumer-friendly deal. What could that look like?

What could that look like? It should include actual benefits for consumers. For example, why aren’t transatlantic benefits on roaming fees considered? We can also expect consumers to conclude more online contracts with US companies – this requires clarity on what remedies the consumer has when things go wrong (late delivery, payment incidents, defective products, language of product manuals, dispute resolution), including access to courts. By extension, any dysfunction within a transatlantic free trade market – e.g. unfair contract terms – must be tackled through effective cooperation between (and enforcement by) EU & US consumer protection authorities.

This is not all. We have serious concerns on the most recent TTIP texts, such as the proposed investor court system or the introduction of the US notice-and-comment system in the EU. Others share these concerns and nobody should ignore public distrust in trade deals – its impact exemplified by the recent political drama surrounding the EU-Canada (CETA) deal.

It is crucially important that negotiators use this hibernation phase to rethink what we call ‘trade’ and what we put in ‘trade deals’, so as to improve their content and make them acceptable for society.

It is crucially important that negotiators use this hibernation phase to rethink what we call ‘trade’ and what we put in ‘trade deals’, so as to improve their content and make them acceptable for society. We should also explore to what extent there are other avenues to address global economic governance in a more democratic, inclusive and careful way.

The grim reaper hasn’t come for TTIP yet. BEUC and its member organisations will therefore continue to push for the birth, pun intended, of a TTIP that protects and benefits consumers. Because any trade agreement negotiated now will be a template for others in the future.