In the wake of the 2013 horsemeat scandal, European consumers’ confidence in their meat has hit rock-bottom. The now infamous ’horsegate’ was only one incident in a long line.

Consumers are increasingly interested in the meat they buy and eat. They want to know where it comes from and how it was produced.

Consumers should be able to trust their meat. BEUC is spearheading a 2 part Europe-wide campaign for:

More info about the campaign.

Studies show 90% of EU consumers want to know where their meat comes from, whether it’s a fresh cutlet or an ingredient in ready meals. 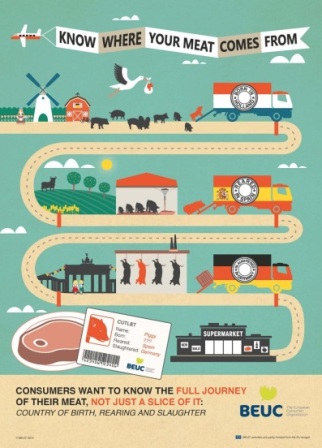 Today in the EU, Country of Origin Labelling ('COOL') is only compulsory for fresh beef: it must display the animal’s country of birth, rearing and slaughter.

As of April 2015, fresh pig, poultry, sheep and goat meat will also have to indicate the animal’s country of rearing and slaughter. Unfortunately birthplace was scrapped for those types of meat. Click to see our infographic on the left requesting all three stages to be labelled.

In contrast, the European Commission, until now, has not proposed any plans to make origin labelling compulsory for meat in processed in foods such as bacon, chicken nuggets or frozen beef lasagne. When buying such products, you have no clue of the meat’s origin.

COOL opponents argue it would be too costly and/or not practical. Only a handful of manufacturers lead by example and volunteer this information.

To end this meat mystery, we want Country of Origin Labelling to become mandatory for processed meat. Origin labelling must mean the animal’s country of birth, rearing and slaughter.

In February 2015, the European Parliament massively endorsed COOL for processed meat. We now expect the European Commission will heed the Parliament’s message and come up with a proposal in line with consumers’ expectations. See our press reaction here.

To reach our objective, we contacted Members of the European Parliament and the European Commission. To learn more about our actions, check out the ‘What can I do?’ section. 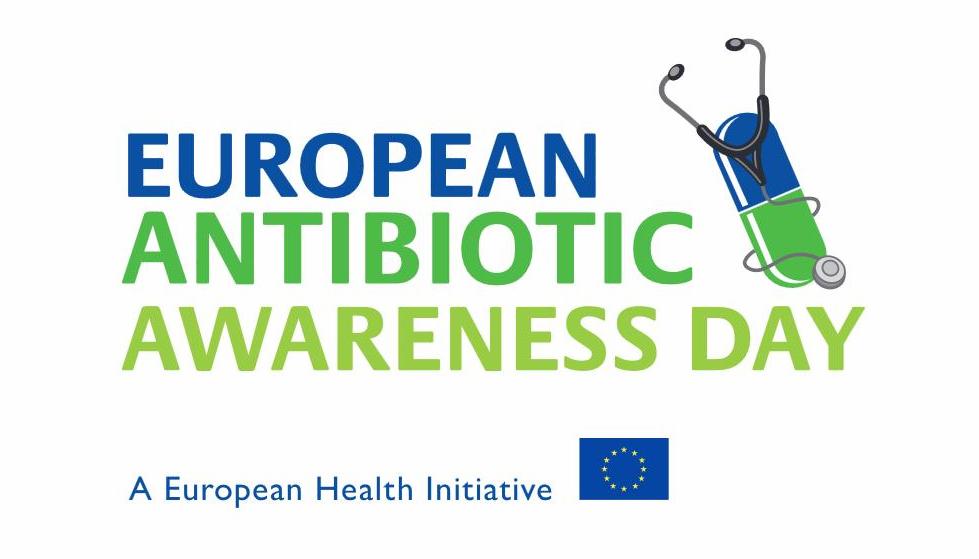 25,000 people in the EU die from antimicrobial resistance each year. While antibiotics should not be a sudden reflex when we are ill, this needs to apply to farm animals also. 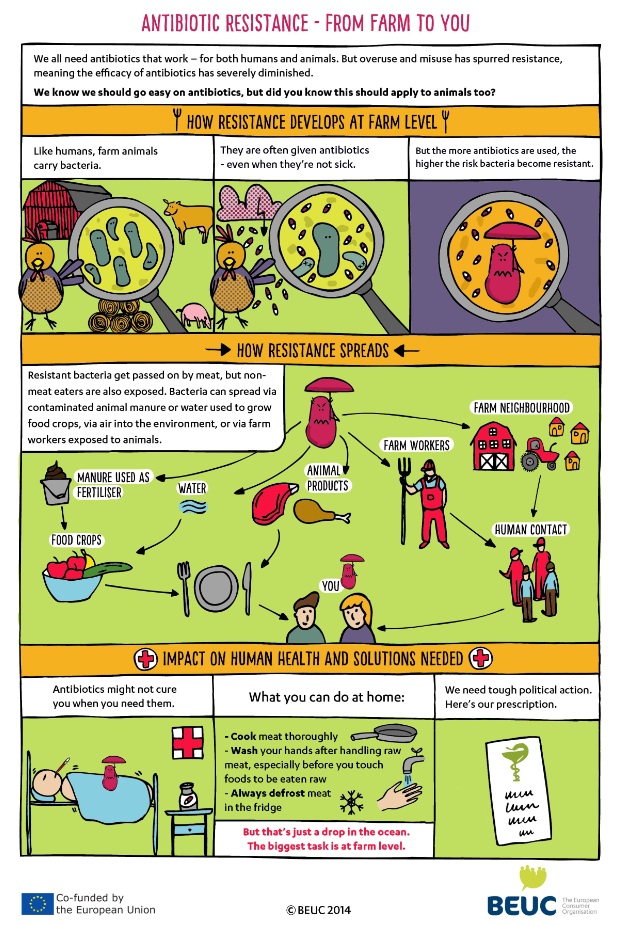 urrent EU rules on antibiotic usage on livestock are inadequate. While antibiotic use for growth promotion was banned in the EU in 2006, animals are still given antibiotics to prevent sickness although the whole herd is healthy.

Overuse and misuse of antibiotics among livestock generates resistant bacteria which can be transmitted from a farm to you by multiple routes, including food. These bacteria may also transfer their drug-resistance to other germs. So antibiotics eventually become useless when we need them. 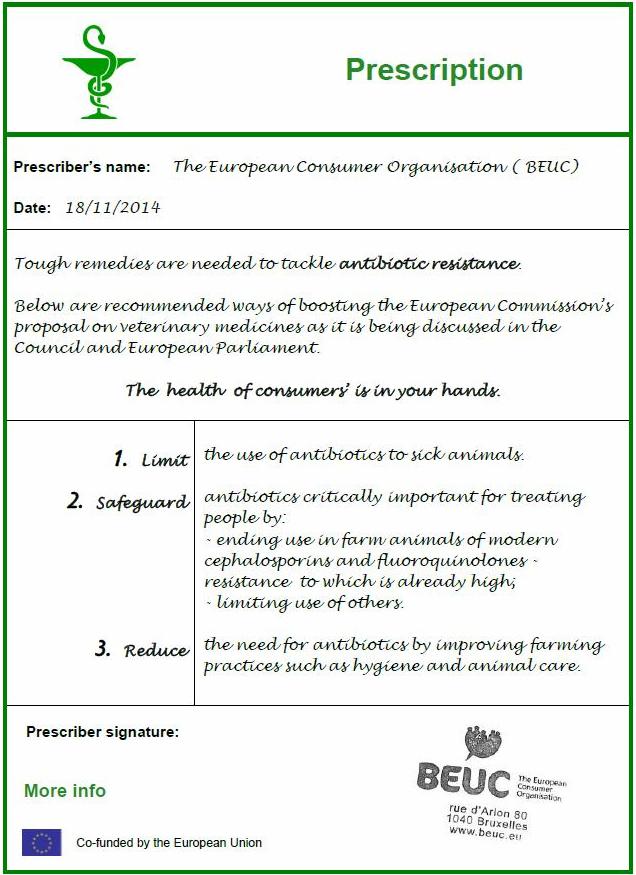 If we are to curb resistance, the new EU proposals[1] should clearly prohibit administration of antibiotics to healthy animals. Also, those antibiotics which we crucially need to treat humans must not be given to animals.

Click the prescription to see our recommendations to EU decision makers.

Consumers have no option but to rely on food labels to help inform them in their purchasing decisions. However, are labels telling them the truth about what meat-based products such as burgers, sausages and pork satay are really made of? 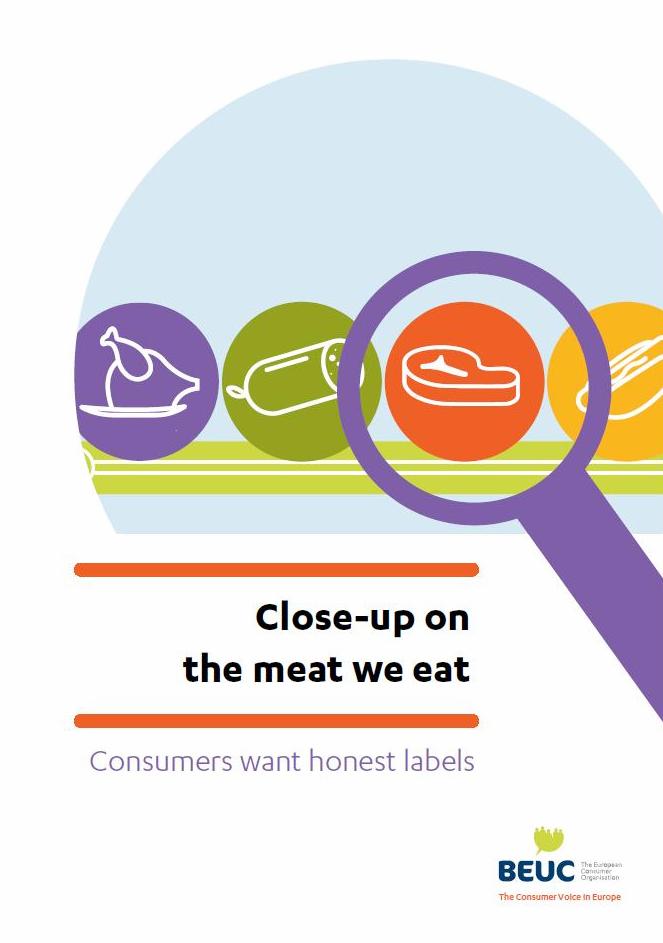 Croquettes containing half the quantity of meat declared on the label, sulphites used to make minced beef look fresher and chicken sold as veal in kebabs are but a few of the deceptive practices unveiled in our new report “Close-up on the meat we eat – Consumers want honest labels”.

Based on tests carried out by seven BEUC member organisations[1] over 2014-2015, the report reveals meat-based foods might not always live up to consumers’ expectations, when labels are not deliberately misleading them.

In light of these findings and to ensure consumers can trust meat labels, we have issued several recommendations including checks on additives used in meat-based products must be stepped up and cracking down on food fraud must remain high on the EU agenda.