Today, consumer groups remind EU decision-makers that only with swift EU action on CO2 emissions will consumers have wider choice in choosing fuel-efficient and low-carbon cars (such as electric ones). The groups ask this as EU institutions meet for a fourth round of  negotiations to set CO2 emission targets for the next decade – the latest reports from Parliament indicate these negotiations are stalling. 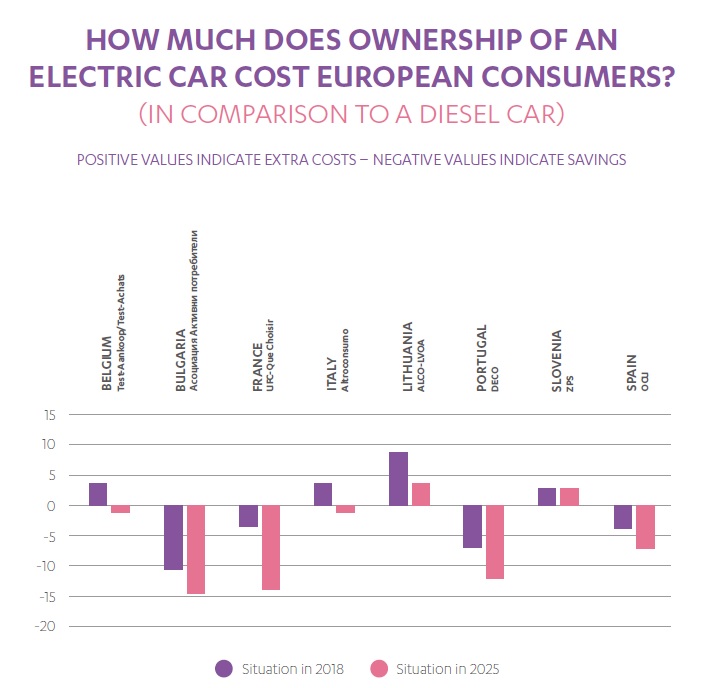 In 2016, a Europe-wide study by consumer groups showed that people buying a petrol/diesel car in 2025 could save up to €9,400 over their car’s lifetime compared with 2015. But they can only do so with reduction targets that push the automobile sector to roll-out more fuel-efficient cars in showrooms.

The study also concluded the average 4-year cost of running an electric vehicle in the EU should match that of a petrol car by 2024. A problem here is that the present-day offer for such cars is too limited despite there being potential for their uptake by consumers.

Only with sufficient choice can people make their own cost/benefit analysis whether to opt for electric, hybrid or a more fuel-efficient conventional car. And this is important as people across Europe might have different mobility needs, driving habits and preferences.

Are electric cars an affordable option for European consumers?

As legal systems also differ, eight consumer groups conducted complementary studies in a series of European countries. They took electric cars as example and looked at whether national parameters affect the moment where these cars ‘break even’ with fossil fuel cars.

This research underlines that clean car technologies are increasingly competitive. Lower maintenance and fuel costs play a huge role here. At the same time, the consumer groups also highlight factors – such as the need for easy charging – that play a role in making electric cars a convenient option for Europeans.

More on the affordability of electric cars for Europeans

Find out more about the national results for: