In a statement, 42 consumer and digital rights groups underline the importance of trust in the digital economy. This can only happen by placing people’s fundamental rights to data protection and privacy first. 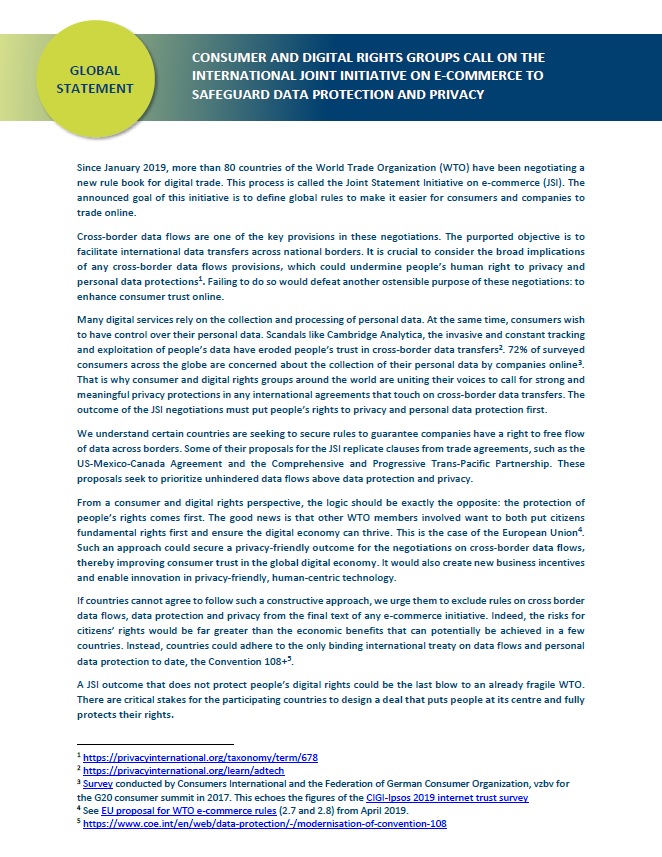 Digital trade negotiations at the World Trade Organization – formally known as ‘joint initiative on e-commerce’ – started in 2019 and now comprise more than 80 countries. The negotiations aim to make it easier for consumers and companies to trade online.

A purported objective of some countries is to ensure the transfer of data across international borders (‘cross-border data flows’). In today’s statement, consumer and digital rights groups urge WTO negotiators to seriously consider the implications of these rules on people’s privacy and personal data protection before committing to them in both present and future trade deals.

The signatories understand that some countries want rules for an unhindered free flow of data, effectively prioritising it over people’s rights to privacy and data protection. Such rules exist already in other trade deals – such as the new US-Mexico-Canada agreement. This effectively restricts countries’ ability to regulate data protection and privacy, which would only be allowed under strict conditions in order to avoid ‘obstructing’ data flows.

As a result, people’s fundamental rights to privacy and protection of personal data might not be sufficiently protected. For consumer and digital rights group this is not acceptable: the protection of people’s rights comes first. In its statement, the 42 signatories call upon WTO negotiators to follow our suggested approach for successful negotiations:

Background information
International data transfers are an important feature of the present-day global economy. However, when transferring data cross-border, data cannot travel alone. It must travel with strong and effective privacy and personal data protections. The world has more than 140 data protection laws. Some, such as the General Data Protection Regulation (GDPR), ensure that citizens’ data is protected when companies decide to transfer it abroad. Laws therefore play an important role in ensuring data flow with privacy. Trade negotiations that cover cross-border data flows can complicate this. All 80 countries that are part of digital trade negotiations should be able to have and enforce high levels of rights protections, so we do not have first, second or third-class privacy protections across the globe.

1 The signatories support the European Union’s proposal in this regard. See EU proposal for WTO e-commerce rules (2.7 and 2.8) from April 2019.