BEUC – The European Consumer Organisation, together with eight of its members,1 today filed a complaint (with the European Commission and the European network of consumer authorities) against WhatsApp for multiple breaches of EU consumer rights.2 For several months now, WhatsApp has been unduly pressuring its users to accept its new terms of use and privacy policy. Yet these terms are neither transparent nor comprehensible for users. 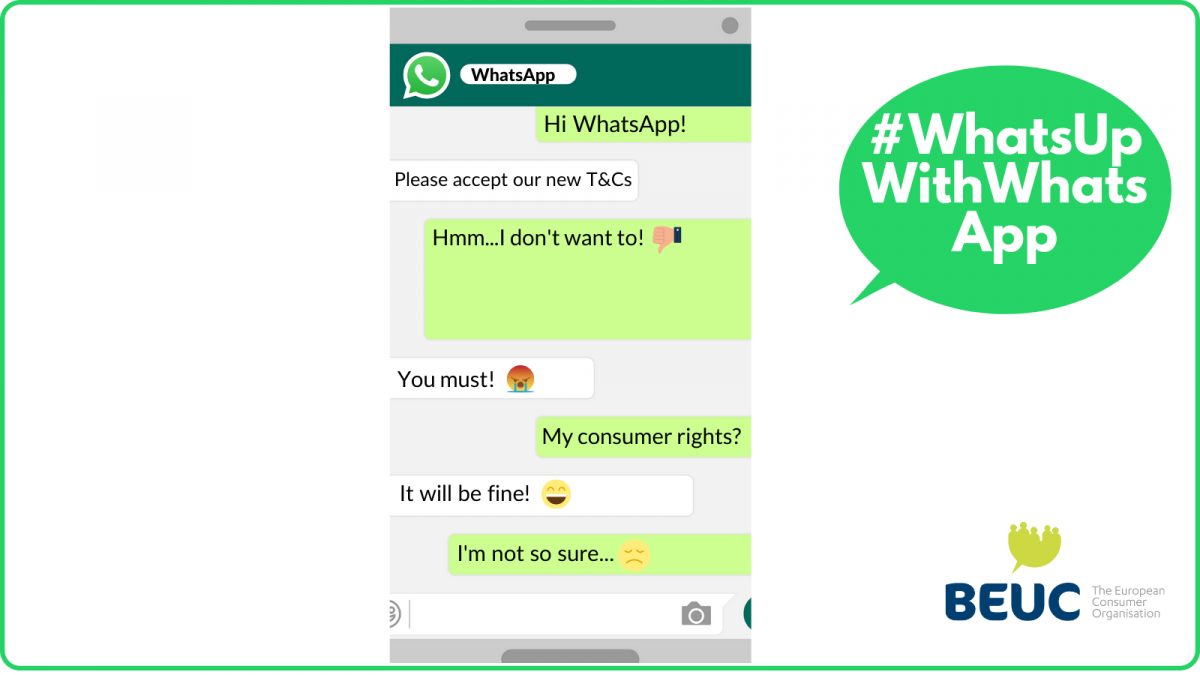 The complaint is first due to the persistent, recurrent and intrusive notifications pushing users to accept WhatsApp’s policy updates. The content of these notifications, their nature, timing and recurrence put an undue pressure on users and impair their freedom of choice. As such, they are a breach of the EU Directive on Unfair Commercial Practices.

In addition, the complaint highlights the opacity of the new terms and the fact that WhatsApp has failed to explain in plain and intelligible language the nature of the changes. It is basically impossible for consumers to get a clear understanding of what consequences WhatsApp’s changes entail for their privacy, particularly in relation to the transfer of their personal data to Facebook and other third parties. This ambiguity amounts to a breach of EU consumer law which obliges companies to use clear and transparent contract terms and commercial communications.

BEUC Director General Monique Goyens said: “WhatsApp has been bombarding users for months with aggressive and persistent pop-up messages to force them to accept its new terms of use and privacy policy. They’ve been telling users that their access to their app will be cut off if they do not accept the new terms. Yet consumers don’t know what they’re actually accepting. WhatsApp has been deliberately vague about this and consumers would be exposed to far reaching data processing without valid consent. That’s why we’re calling on the authorities to take swift action against WhatsApp to ensure that it respects consumer rights”.

Background
For several months now, WhatsApp has been pushing consumers to accept changes to its terms of use and privacy policy. Since then, consumers have been bombarded with persistent notifications to accept the new terms, making them believe they would experience limited app functionality if they do not.  BEUC explains why such practices are problematic from a consumer rights perspective in its report ‘What’s Up With WhatsApp - an assessment of WhatsApp’s practices in the light of EU consumer protection rules’ accompanying the external alert.