Home Publications 10 years on from the first inefficient light bulb ban, consumers have saved up to €1,330

10 years on from the first inefficient light bulb ban, consumers have saved up to €1,330

In the decade after EU rules on energy-efficient lighting kicked in, the average European household has saved up to €1,330 − the equivalent combined price of a mid-range washing machine, fridge and dishwasher. The figure comes from a new study commissioned by ANEC, the European consumer voice in standardisation, and BEUC, The European Consumer Organisation.1 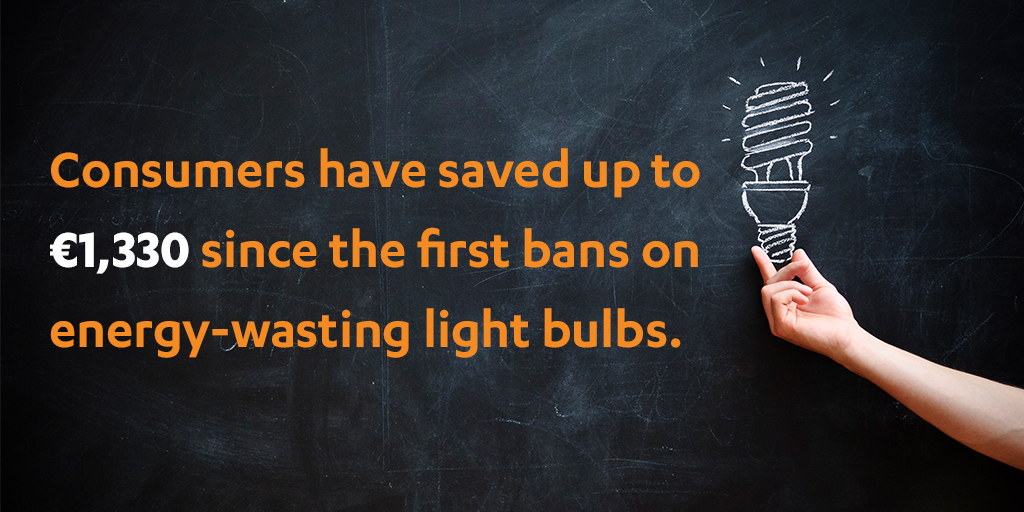 Thanks to the EU Ecodesign lighting regulation, inefficient incandescent and halogen light bulbs have been phased out progressively since 1st September 2009, paving the way to more efficient LEDs. According to Spanish consumer association OCU, LEDs are up to 10 times more efficient than incandescent bulbs. ANEC and BEUC had long called for the progressive phasing out of incandescent light bulbs, proven to disadvantage both the consumer’s pocket and the environment.

The successive bans have boosted sales of LEDs and helped consumers save money in the long term. British consumer group Which? found that, in comparison to halogen light bulbs, LEDs last much longer and are cheaper to run.

“Not only have LEDs become more energy-efficient, but their quality has also improved over time. For example, colour rendering and brightness are both better. Lights have become nicer to the eye and less troubling for people prone to migraines, thanks to reduced flickering.”

We have identified three saving scenarios (savings per household from 2009 to 2019):

1. This study, carried out by Öko-Institut, considers the average household to be 3 persons (a couple with one child), equipped with 45 lamps. The average yearly use is 450 hours for halogens and 500 hours for LED lamps.