Why it matters to consumers:

To curb antibiotic resistance farmers must only give antibiotics to sick animals, not to the healthy ones, according to an EU Parliament vote yesterday which tightens a Commission text regulating animal medicines.1 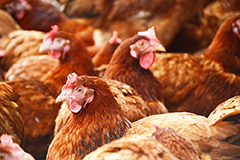 BEUC applauds the Members of the Committee for Environment, Food and Health issues for heeding a series of longstanding campaign demands from its member organisations.

“Antibiotic resistance is real and is threatening great medical advances such as surgery or chemotherapy. We will only win this fight if we slash the use of antibiotics both in humans and in farm animals. The only way forward is for every single European country to apply the same strict rules.

“Why should an animal take medication if it isn’t sick? Giving antibiotics to perfectly healthy animals feeds antibiotic resistance. This detrimental, routine practice must end now if we want our drugs to keep saving lives. If they fail to work, a simple finger cut could become serious, and even life threatening.”

The  more  antibiotics are used,  the  higher  the  risk  bacteria  become  resistant.  Misuse and  overuse  on farm animals spurs antimicrobial resistance which can spread to humans in several ways, including food.

In several European countries more antibiotics are used in animals than in humans. As over 90% of livestock antibiotics are ingested via water or feed, they usually end up in the stomachs of the whole herd rather than a few sick animals.

The whole EU Parliament is due to vote the text this spring.

More about our campaign

1 In September 2014 the European Commission published a proposal to review existing legislation covering the use of veterinary medicines. Antibiotic resistance is one of the key aspects of the new text.