From financial mis-selling scandals to cheat devices installed in diesel cars, consumers across the EU sometimes fall victim to products or services that cause them harm. But they usually have very little chance to get compensation in court.

Legal proceedings are expensive, time-consuming and the compensation amounts might not always be large. For small amounts, it is usually not economically viable for people to go through legal proceedings on their own, but the frustration remains. In situations of mass harm, often the only realistic option for consumers is to try to obtain compensation by going to court together and have an expert fight the case on their behalf. Unfortunately, most EU countries do not have functional, simple-to-use systems. The ease with which consumer representatives can file group claims varies enormously according to the country, and there is no EU-wide scheme.

This means that in a case like the Volkswagen emissions scandal, where consumers across the continent bought cars unaware that they were equipped with devices which cheated emissions tests, consumers could only launch a legal proceeding in a few countries. This situation was in stark contrast to the US, where Volkswagen quickly coughed up compensation as the threat of class actions loomed.

This situation has existed for too long and requires EU action now. An EU recommendation to Member States to adopt a collective redress system with minimum standards in 2013 has had little impact. A Commission report published in January 2018 shows there are still 9 Member States which do not provide any possibility to collectively claim compensation in mass harm situations. In many of the Member States with a collective redress system, people do not use the procedure either because it is too rigid, too lengthy or because there is a feeling the costs will likely outweigh the benefits.

The Commission announced at the end of 2017 it would address the issue of compensation through the review of the Injunctions Directive. The proposal is expected in April 2018 and should make it possible to claim compensation and an injunction (a court order to end a certain activity) at the same time.

There are plenty of examples of mass harm situations where consumers are left empty-handed if there is no collective redress system in place. 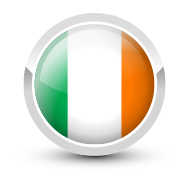 In Ireland, some 160,000 people would have been in line for a claim of between €100 and €200 each for having been mis-sold a credit card protection policy. This would make the total damage equivalent to between €15 million and €30 million. However, there is no collective redress system in Ireland those consumers could use. 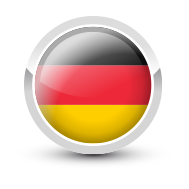 In Germany, in 2012 the Federal Court of Justice decided that certain contract clauses, which limited the amount of money paid out to the policyholder when a policy is terminated before it matures, were invalid. This could have been the basis for recovery claims of millions of consumers. The Consumer Association of Hamburg took action against Allianz Lebensversicherungs AG at Stuttgart District Court. According to the consumer association’s estimate, claims against Allianz added up to between €1.3 billion and €4 billion. 80 consumers had ceded their claims to the consumer association. In the end, the 80 consumers involved were refunded €114,000. However, as the recovery claims procedure used in this case is too complex to be used for large numbers of consumers, and a suitable collective redress mechanism is not available in Germany, millions of consumers were left without any compensation. 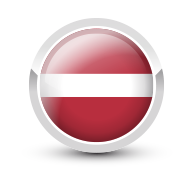 In Latvia, a large consumer credit company, BigBank has been deemed to be misleading consumers with respect to interest rates on credit cards for a period of approximately two and a half years. As a result of this unfair commercial practice, many consumers have suffered damages up to €10,000 per person. Even though the total damages are hard to measure, it is safe to assume that several thousand Latvian consumers have been victims of this practice, without collective compensatory relief being available. 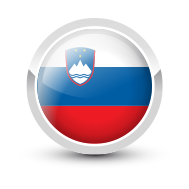 A recent predatory lending case in Slovenia involved the collaboration of Czech and Slovenian companies which were not permitted to lend money, as they were not registered as required under the Slovenian law. The Slovenian consumers’ association ZPS managed to get court rulings rendering the loan contracts void. However, they are now struggling along with individual consumers to seek compensation through separate claims, covering damages of €1,000 to €2,500 per case. 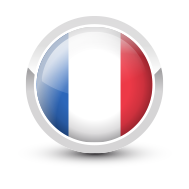 In France, after the unfair invoicing of payment notices for their rent, 318,000 consumers were left with €44 million in damages overall. 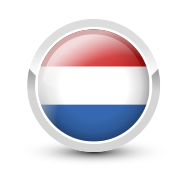 In the Netherlands, Dutch consumer organisation Consumentenbond is in court over numerous toxic financial products sold by big insurance companies with high hidden costs. The estimated total damage in these cases is between €20 billion and €30 billion.

1. Isn’t there a risk that launching court cases without merit harms the reputation of the business in question?
2. Doesn’t collective redress massively increase the amount of litigation?
3. Isn’t there a risk of a business going bankrupt following a collective redress case?
4. Why are we importing a US system into the EU?
5. Isn’t this a way for US law firms to make more money?
6. Aren’t the existing national procedures enough to act?
7. Isn’t this just an opportunity to increase profits for third party funders?
8. Won’t the erosion of the ‘loser pays’ principle just bring an abuse of litigation?

1. Isn’t there a risk that launching court cases without merit harms the reputation of the business in question?

There is a low risk of this happening because there are early stage court hearings which are there to establish if the case has merit. Only then is the court case actually launched.
Claims that defendants in the USA settle even claims without merit are not based on facts. Most settlements take place after an admissibility hearing. Only then do defendants see the case as serious and as one that could potentially succeed for the plaintiff.

EU Member States with a functioning collective redress mechanism do not have an increase in litigation. Even in the US, class actions do not constitute a significant part of all civil litigation cases (less than 1% of all civil suits).
On the contrary. In mass claims situations that have caused hundreds or thousands of individual cases, for example the Payment Protection Insurance (PPI) case in the UK, the burden on courts would have been reduced by having a collective redress option, because it would federate all the individual cases into one.

3. Isn’t there a risk of a business going bankrupt following a collective redress case?

To date, there has not been a single case of bankruptcy in an EU country because of a case of collective redress.

4. Why are we importing a US system into the EU?

But in the EU collective actions:

5. Isn’t this a way for US law firms to make more money?

The EU and its Member States should regulate on ‘designated entities’ i.e. those which can bring collective actions.

Only a handful of Member States have efficient systems in place that can be used by consumers to get compensation.

7. Isn’t this just an opportunity to increase profits for third party funders?

The procedural rules in most Member States already contain general safeguards against any kind of abuse in the civil actions.

8. Won’t the erosion of the ‘loser pays’ principle just bring an abuse of litigation?

In a number of EU countries (Portugal, Belgium, Italy and Spain) the judges have discretion not to apply the principle fully since many years, but so far no increase of abusive litigation has been reported.

Consumers have real difficulty in accessing a working system of collective redress generally.

GREEN: Only a handful of EU countries have a functioning and relatively easy-to-use collective redress system that consumers can use.

ORANGE: Other countries have a system in place, but the procedure isn’t used either because it is too rigid, too lengthy or because there is a feeling the costs might outweigh the benefits.

GREY: Some countries have recently introduced a system that allows collective redress but it is too early to assess whether the system works well to the benefit of consumers.

RED: there are still countries in the EU where there is no way for consumers to claim compensation collectively in court. 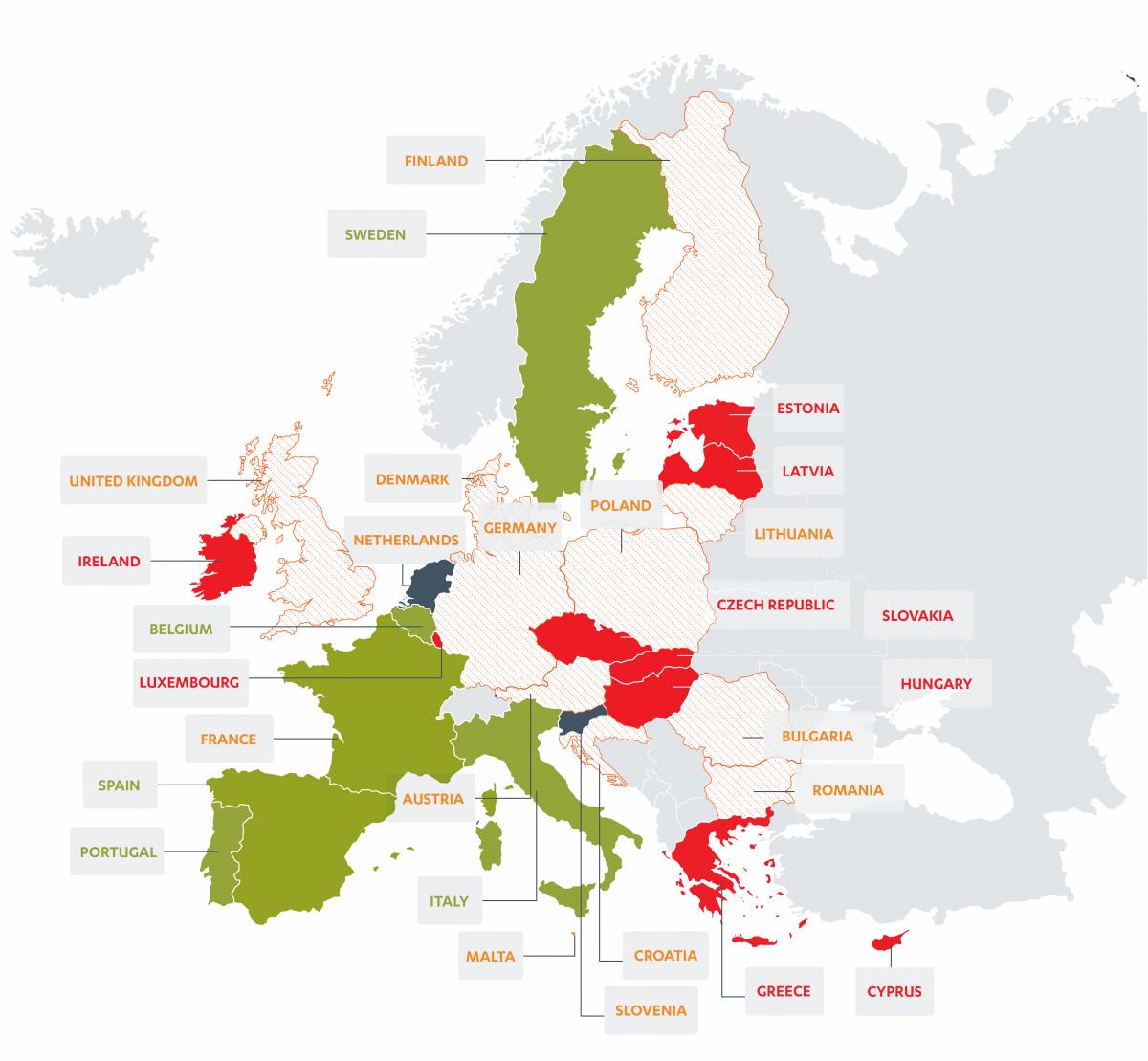 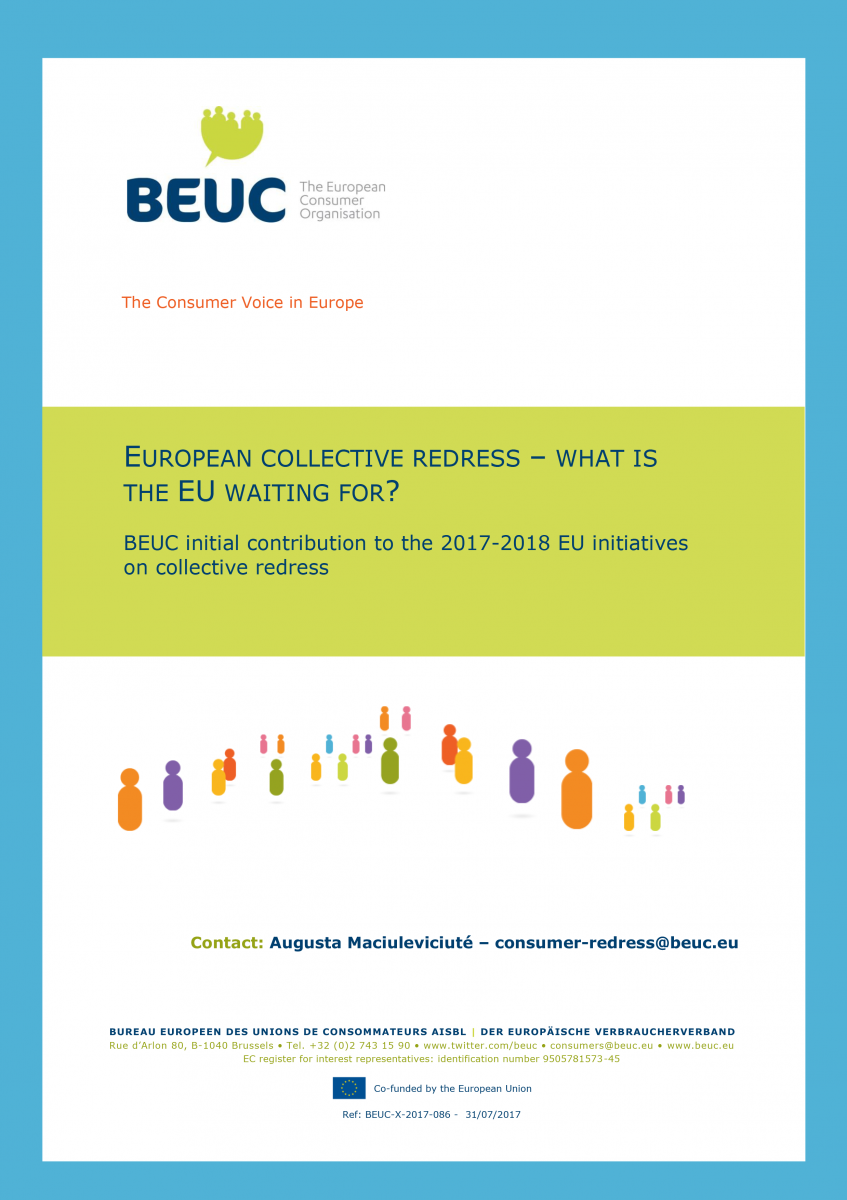 Lack of compensation for harm suffered is a major loophole in a legal system and allows for illegal profit to be retained by business. Judicial collective redress for consumers currently operates nationally only in limited number of Member States. Even where it is available, the models and effectiveness of the mechanisms vary significantly. They also do not provide for cross-border solutions. This leads to a significant discrimination in access to justice, to the detriment of consumers.

Scandals like dieselgate have shown just how vulnerable consumers are when they suffer damages and the company refuses to pay compensation. That’s why it’s important that consumers can go to court together to file a claim for compensation. 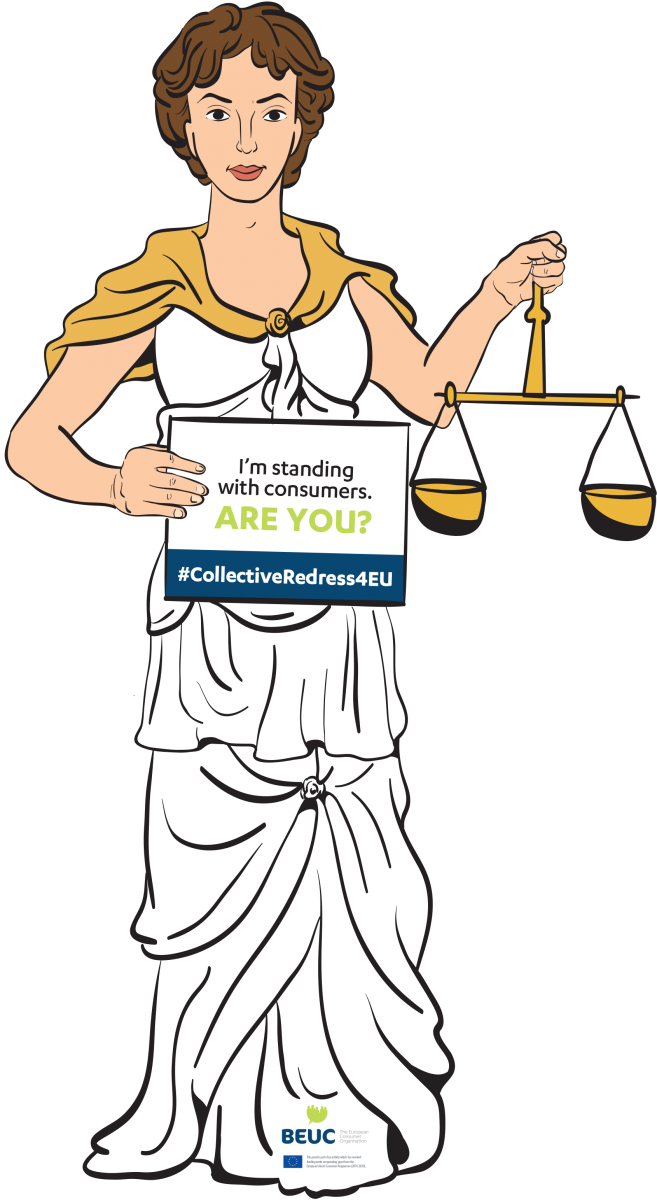 Unfortunately there are still many countries around Europe where it isn’t possible to file group claims.

But we know there’s support in the Parliament to change this. The Commission has recently proposed a tool which would allow collective redress everywhere in the EU, and we wanted to show the support there is inside the Parliament to allow group actions.

We made a cut-out of Lady Justice, which symbolically calls for the right to consumers to use collective redress, and we asked MEPs from the legal (JURI) and internal market (IMCO) committees to stand with her for a photo.

You can see the results so far by clicking on the Flickr gallery link below.